[dropcap color=”#008040″ boxed=”yes” boxed_radius=”8px” class=”” id=””]T[/dropcap]he Delhi government’s decision to curb vehicles on the capital’s roads have given hope of battling pollution, but the measure, announced on an experimental basis, has become a cause of concern for women, who fear it would compromise their safety.

Delhi Chief Minister Arvind Kejriwal, at the Hindustan Times Leadership Summit on Saturday, was asked about the safety aspect when people leave their cars and take public transport.

“Would you guarantee my pocket is not picked or a woman is safe in public transport,” a male questioner asked.

Prefacing his reply with a “Delhi Police does not come under me” disclaimer, Kejriwal, who had announced on Friday that from January 1, 2016, odd and even numbers would be permitted on alternate days, said: “People are as safe in public transport as they are in private vehicles.”

Most women, while equally expressing concern about environment, differed with the chief minister when it came to feeling safe on Delhi roads.

[dropcap color=”#008040″ boxed=”yes” boxed_radius=”8px” class=”” id=””]I[/dropcap]” am not happy with this decision, public transport in Delhi is not very good and you have a tough time trying to take an auto-rickshaw… What are the women expected to do?” asked Diksha Saxena, an operations manager with a private firm.

“Even to walk on the roads of Delhi, you need armour… The idea sounds good but is not practical,” Saxena told IANS.

Alka Kaushik, a freelance travel writer, said: “Its a senseless order, an imported concept which is being implemented without seeing the ground realities. Imagine, I cam use my even-number plate car one day, and the next day, I should use the insufficient public transport on the same route… If I can use public transport on a day, why not every day?

[dropcap color=”#008040″ boxed=”yes” boxed_radius=”8px” class=”” id=””]B[/dropcap]”ut is that possible? Look at the route from Indirapuram (in suburban Ghaziabad) to Delhi University. The kind of people you come across while travelling – does the chief minister realise that? A car is not a convenience for me but a necessity. It is a solution to the inefficiency of authorities who could not give the people a good public transport system in all these years,” she added.

Kakoli, a Delhi government employee who did not want to give her surname, echoed this view.

“This should have been the second step… the first should have been ensuring there is a public transport system that can support half of Delhi’s population that drives on a single day,” Kakoli said.

“I am a single working woman, my car gives me the independence of movement, and to chose my working hours… If I cannot use my vehicle half of the month, what options do I have to fall back on,” she asked.

“There are couples who have two cars, and have both odd and even number plates… Should I go looking for a partner with a different number plate… It is a compromise on my independence,” Kakoli maintained.

Shweta Arya, who works for a private firm, is not against using public transport but felt it was not an option if late working hours are involved.

[dropcap color=”#008040″ boxed=”yes” boxed_radius=”8px” class=”” id=””]W[/dropcap]”e cannot refuse work that spills over to late hours… If I am being asked not to use my car, what options are there? What if I need to go to hospital at a late hour? Or I have to go out of town… What are the options?… ” she questioned.

Arya is however not all against the idea, and suggests that the government should provide other options.

“The government must provide some options. For example if I am not using my car, there should be certain number of auto-rickshaws designated for our use, or there can be car pooling, the government needs to provide an alternative,” Arya told IANS.

Ragini Jain, a home maker living in west Delhi, said while she is happy that it will mean reducing pollution, she also wondered how she will perform her day-to-day chores.

“[dropcap color=”#008040″ boxed=”yes” boxed_radius=”8px” class=”” id=””]T[/dropcap]here are numerous things to be done on a given day… Picking up children from school, getting groceries, managing a medical emergency since I have old parents at home…Whom should I ask for help? Can anyone help you every day,” Jain asked.

“At the same time, I know some day we have to take a decision, for the sake of our children. Perhaps there is some more homework that needs to be done by the government,” she said.

A supportive voice, however, came from Divyani Garg, a doctor who found the idea good.

“its a good idea as per me… It’s a reasonable option to decrease the toxic levels of Delhi’s air pollution. I don’t mind the inconvenience as I am looking at the long-term benefits,” she said. 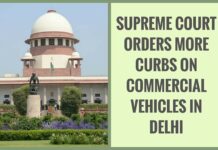