Scholars raised objection over a poster displayed on a Facebook page by the Urdu division of Banaras Hindu University (BHU) that displayed the photograph of Allama Muhammad Iqbal — an Urdu poet who envisioned the two-nation principle and was an inspiration for Pakistan.

However, the image of BHU founder Pt Madan Mohan Malaviya was missing from the poster.

Allama Iqbal propounded the two-nation theory and the ideology of Pakistan Tehreek and publically made a case for the partition of India.

His renditions explicitly reject the idea of nationhood and advocate for the cause of a global Islamic State.

The poster carrying the photograph of Allama Muhammad Iqbal was withdrawn after a group of students raised objections in the Banaras Hindu University (BHU).

Following serious objections on social media, the poster has been removed from the Facebook page and the Urdu department has apologized. The Urdu department authorities replaced the poster on its Facebook page and tweeted, “Urdu Department, Faculty of Arts, #BHU, is organizing a webinar as per the details given in the poster. Sincerest apologies for the inadvertent mistake in the earlier poster that went viral on social media.”

Urdu Department, Faculty of Arts, #BHU, is organizing a webinar as per the details given in the poster. Sincerest apologies for the inadvertent mistake in the earlier poster that went viral on social media.@bhupro @VCofficeBHU pic.twitter.com/loGvXe99IU

The head of the Urdu department has expressed his apology in writing.

The dean of the faculty also tweeted the new poster with an apology and formed a committee to look into the matter.

BHU spokesman Rajesh Singh said, “The Urdu department of the faculty of Arts (BHU) had organized a webinar on the role of Allama Iqbal in the growth of Urdu on the occasion of Urdu Day on Tuesday. The department had uploaded the poster of the webinar on its Facebook page on Monday carrying the photograph of the Urdu poet. When the attention of the Urdu department officials was drawn towards the issue, they removed the poster.” 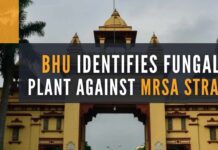