[dropcap color=”#008040″ boxed=”yes” boxed_radius=”8px” class=”” id=””]A[/dropcap] proxy war has been launched in Tamil Nadu by the AIADMK against the BJP. While doing so the State is witnessing the opening of a new battlefront in this poll bound State.

The supreme leader of the AIADMK, J Jayalalithaa, fielded on Tuesday Natham R Viswanathan, the Tamil Nadu minister for power and a trusted loyalist, to ‘demolish’ the statement made by Union Minister of State for Power Piyush Goyal that she was inaccessible for discussing issues related to the State. She has made it clear, though indirectly that the BJP would be one of her prime targets in the ensuing assembly election.

This comes at a time when the five-party Peoples Welfare Front which include the DMDK, the MDMK, the VCK , the CPI(M) and the CPI, is busy targeting the DMK and the first family of Tamil Nadu with charges of corruption and misdeeds. But Jayalalithaa has chosen her loyalists to take on Goyal as she feels the union minister is not up to her stature. “Had it been Prime Minister Narendra Modi, she would have come out in the open to take on him,” said a senior political analyst.

It is clear that both the statements were prepared by Jayalalithaa and issued in the name of her loyalist ministers. “The UDAY scheme does not suit the state of Tamil Nadu,” said the release issued in Viswanathan’s name. Though 15 States have joined the UDAY, Tamil Nadu has declared that it would not be a party to the scheme.

Goyal had said in his speech last Friday that Tamil Nadu has shown no interest in joining the UDAY in spite of his efforts to convince the State authorities. “UDAY is not people friendly. It will benefit only the private power producers and the banks,” said the release issued in Viswanathan’s name. The AIADMK leader has indirectly referred to Goyal’s previous avatar as a corporate banker while making this statement.

Prakash Jawadekar, the Union Minister in charge of Tamil Nadu elections, made it known that he would be in Chennai on March 31 and April 1 giving indications that a lot of “fireworks” are on anvil between the Hindutva party and the AIADMK. 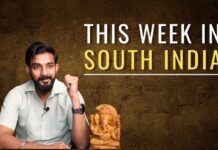 #AskKarthik EP 2: Look at the week that was, in South India, Sree Iyer with Karthik Gopinath