None of the Public sector banks presents a rosy scenario

The third-quarter results of banks once again prove, if a proof is indeed needed, that the public sector sucks. While private lenders are making profits, public sector banks (PSBs) are incurring heavy losses.

The largest lender State Bank of India posted a net loss Rs 2,416.37 crore for the December quarter, as compared to a net profit of Rs 2,610 crore in the corresponding period in 2016-17. The bank said that the loss is “due to lower trading income due to hardening of bond yields, higher corporate slippages leading to higher loan loss provisions and significant investment depreciation hit.”

The Punjab National Bank, which is in news for the Nirav Modi-Mehul Choksi scam, posted a profit in their third quarter.

Compare this with the performance of the largest private bank, ICICI. It reported a profit worth Rs 1,650 crore in the third quarter, though it was 32.4 percent than in the corresponding quarter the previous fiscal.

Interestingly, the Punjab National Bank, which is in news for the Nirav Modi-Mehul Choksi scam, posted a profit in their third quarter. The second largest state-run bank posted at profit of Rs 230.11 crore, a growth of 11 per cent higher on year-on-year basis. “The bank showed a good improvement on asset quality front as gross non-performing assets were lower at 12.11 per cent compared to 13.31 per cent in previous quarter,” www.moneycontrol.com reported on February 7. “Net NPAs were also lower at 7.55 per cent from 8.44 per cent on sequential basis.”

Evidently, the PNB top brass managed to conceal the deep wound inflicted by the Modi-Choksi duo till a fortnight before the scam exploded. Against this backdrop, one has to take Bank of Baroda’s third-quarter results with a pinch of salt. About a month ago, the third largest PSB reported net profit at Rs112 crore, though with a decline of 56 percent. One can only hope that there are no unexposed Nirav Modis here.

Corporation Bank incurred a net loss of Rs 1,240 crore for the December quarter of the current fiscal on higher provisioning for bad loans.

Other PSBs too don’t present a rosy scenario. UCO Bank’s net loss amounted to Rs 1,016.43 crore in Q3, up from Rs 437.09 crore in the quarter ended December 2016. The gross bad loans ratio exceeded 20 percent. There was also a sequential rise in the loss, as it was Rs 622.56 crore in the second quarter ended September of this fiscal.

Andhra Bank had a net loss of Rs 532.02 crore because of higher bad-loan provisioning. In the corresponding October-December period of 2016-17, it had actually posted a net profit of Rs 56.70 crore. Sequentially too, the situation has worsened, as the loss was Rs 385.11 crore loss in the second quarter ended September.

Syndicate Bank presented a similar story: a net loss of Rs 869.77 crore for the December quarter, against a net profit of Rs 93.56 crore in the corresponding quarter of 2016-17.

Similarly, Corporation Bank incurred a net loss of Rs 1,240 crore for the December quarter of the current fiscal on higher provisioning for bad loans. In the corresponding quarter last fiscal, it had registered a net profit of Rs 159 crore. Sequentially too, the net loss surged from Rs 1,035 crore in the second quarter (July-September) of 2017-18.

Private banks, on the other hand, are reporting profits, though they are also troubled by stressed assets.

Central Bank of India—the same story, with loss climbing to Rs 1,664.22 crore for the third quarter, up from Rs 605.70 crore loss in the October-December quarter of 2016-17. Asset quality showed greater deterioration with gross non-performing assets (NPAs) growing to 18.08 percent of gross advances in the third quarter, as against 14.14 percent in the same period last fiscal.

Private banks, on the other hand, are reporting profits, though they are also troubled by stressed assets. Yes Bank’s net profit was Rs 1,076.87 in Q3, down from Rs 882.63 in Q3 2016. IndusInd Bank seems to have weathered the NPA headwinds admirably, posting a profit of Rs 936.25 crore in Q3, against Rs 750.64 crore in the corresponding quarter last fiscal.

It is not just the taxpayer who has to bear the brunt of mismanagement of scam-ridden PSBs; the customer too has to suffer. SBI has increased the one-year marginal cost of funds based lending rate or MCLR by 20 bps to 8.15 percent. Higher rates are also bad news for the economy.

All this suffering, just because our political masters are loath to give up their fetish for socialism, which occasioned bank nationalization in the first place. 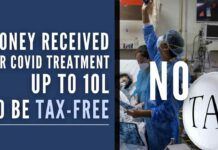 No tax up to Rs.10 lakh received from employer for COVID-19 treatment, notifies Finance Bill

How Vadaam Mami is thriving post-demonetization