Russia-China partnership may get stronger with silk road and more

“We have maintained contact regularly, and carried out consultations on global and regional affairs. We see each other as close allies, so of course we always listen to each other, by this I mean we keep in mind each other’s interests,” Putin told Cai.

He noted that mutual trust between Moscow and Beijing has reached an unprecedented level and laid a solid foundation for bilateral cooperation, which now covers a variety of areas including trade, energy and infrastructure.

Speaking of the drop in the trade value between Russia and China, Putin said it is merely temporary.

Putin also noted that Russia and China have joined hands in such areas as space, aviation, ecology and nuclear energy.

Meanwhile, Russia is paying close attention to the construction of a high-speed railway between Moscow and Kazan, the capital and largest city of Russia’s Republic of Tatarstan, Putin said.

Now under Russia-China joint construction, the 770-km track is designed for bullet trains capable of running at up to 400 km per hour. The trip from Moscow to Kazan currently takes 12 hours, but the time will be reduced to three hours and a half once the line is completed.

The project, Putin said, is probably just the beginning of massive cooperation between Russia and China in infrastructure construction.

GREAT POTENTIAL IN BELT AND ROAD

He proposed that the EEU and China set up a free trade area in their first phase of cooperation under the initiative, so as to boost bilateral cooperation and world economic development at large.

The fundamental path for EEU-China cooperation and the global economic development is to gradually remove various barriers for an open and common cause, Putin said.

He also noted that all EEU members agree to beef up cooperation with China within the framework of the Silk Road Economic Belt, which is part of the Belt and Road Initiative.

The Belt and Road Initiative, which also includes the 21st-Century Maritime Silk Road, was proposed by Chinese President Xi Jinping in 2013.

“Xi’s proposal is very well-timed and appealing, and the initiative holds great potential as it aims to expand China’s cooperation with the world,” Putin said.

Putin also pointed out that as more and more countries in the region show interest in cooperation between the EEU and China, the two sides should avoid setting up an exclusive trade bloc and help create conditions for broader Eurasian cooperation.

Speaking of the Shanghai Cooperation Organization (SCO), Putin said the organization has evolved into a platform for its members to carry out cooperation in multiple areas.

“The SCO has become a popular and attractive organization in the region. Many countries around the world have expressed willingness to join it,” he said.

[dropcap color=”#008040″ boxed=”yes” boxed_radius=”8px” class=”” id=””]A[/dropcap]t the SCO summit in Tashkent on Thursday and Friday, the SCO will formally implement the decision made last year at Russia’s Ufa summit to expand the membership to include India and Pakistan, and discuss the participation of other countries, according to the Russian president.

“The expansion of the SCO’s functions and the increase in its member numbers, particularly the inclusion of those important countries mentioned above, have made it an authoritative and popular international organization in the region and the world at large,” said Putin.

The international situation is complicated and countries hold different positions and views, but joining the SCO will create favorable conditions for seeking solutions, said Putin, adding that he has high hopes for this.

In addition, he suggested that SCO member states expand their cooperation in multiple areas and use the mechanism to address issues beyond border cooperation.

The SCO, which was originally set up to facilitate border cooperation, has expanded its reach to cover such issues as political cooperation as well as infrastructure construction, Putin said.

The organization has also begun to discuss security issues and actions against drug threats, he added.

Amid a sluggish global economic recovery, regional instability, rampant terrorist activities and environmental problems, Putin said, “coordination between Russia and China on the global stage is itself a stabilizing factor in international affairs.” India, Russia to hold annual summit in Delhi next month. Putin to attend 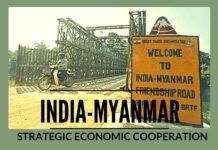