[dropcap color=”#008040″ boxed=”yes” boxed_radius=”8px” class=”” id=””]S[/dropcap]hould Mr. Raghuram Rajan get a second term as Governor of Reserve Bank of India (RBI)? Except for few in the ruling party, there is unanimous opinion amongst the punditry, pink newspaper editorials, independent economists and market experts that he should be reappointed. Prime Minister Narendra Modi will be wise not to renew his term for the following three reasons.

Firstly, India’s biggest challenge is food inflation and rural transformation. Mr. Raghuram Rajan lacks the intimate understanding of India’s hinterland and farming to successfully guide RBI in accomplishing it. Secondly, under his watch, RBI has failed in two critical areas in which it has wholesome responsibility – bank supervision and financial inclusion. Finally, under section 8 of RBI Act, the Governor is a political appointee and as such being anointed to the helm by the previous government, he has been constantly firing salvos that have been detrimental to the Modi government. If Mr. Rajan is as smart as he is made out to be, he will certainly sense the prevailing mood in the country and will voluntarily return to his teaching job in Chicago.

If not, Mr. Modi must replace him with a non-political and a non-bureaucrat to reassure citizens, industry captains as well as the global investing community that RBI will continue to function as an independent institution devoid of interference from the Central Government. And the country has many capable and distinguished economists who are eminently qualified to replace the current Governor. Depending on the immediate priority of the central government, here are some of his possible replacements.

[dropcap color=”#008040″ boxed=”yes” boxed_radius=”8px” class=”” id=””]I[/dropcap]f Mr. Modi wants to deal with the scourge of food inflation and transform the rural economy, his choice must be Mr. Ashok Gulati, a man of extraordinary intellect with an excellent understanding of food inflation and rural India. A famed agricultural economist and currently the Infosys Chair Professor at Indian Council for Research on International Economic Relations (ICRIER), Mr. Gulati has a thorough knowledge of farming and rural India’s credit requirements. He is also a member of the Task Force on Agriculture setup by the Prime Minister under the aegis of NITI Ayog. He is someone who can be an asset at RBI to deliver on the electoral promises of financial inclusion and doubling of farm incomes and output.

Black money has been a thorn in the flesh of this government. If Prime Minister intends to escalate the fight against ill-gotten wealth and want to take on the businessman-banker nexus, he must appoint Prof. R Vaidyanathan of Indian Institute of Management, Bengaluru as the next RBI Governor. A scholar in corporate finance and capital markets, he is a man much needed at the helm of the most important economic institution to bring back black money, reform capital markets and transform the banking system. His exceptional body of work on non-corporate segment comprising of partnerships, proprietorships and self-employed is required to create job opportunities for the more than 12 million youngsters entering the work force every year. He will also be an outstanding advisor to the government on matter of pension issues and can provide able assistance in accomplishing its stated goal of transforming India into a pension society.

Mr. Bibek Debroy, a NITI Ayog member, will be another excellent choice to don RBI Governor’s mantle. A recipient of Padma Shri award in 2015, he is currently a Professor at Center for Policy Research and Visiting Honorary Fellow at the National University of Singapore. An immensely talented man with unparalleled macroeconomic skills and decidedly reform minded, he can certainly bring the necessary changes in the functioning of RBI and can herald a transformation of capital markets and Indian banking system. At NITI Ayog, he authored the report to change railways, has assisted the Jharkhand government in reducing government red tape and been at the forefront of labor reforms in Rajasthan. Rest assured the Prime Minister will have a trusted advisor at the RBI who can lend a hand in delivering on the all important electoral promise of “Minimum Government Maximum Governance”.

If the Prime Minister intends to move India to a market economy and needs an experienced hand who can help him accomplish it, Mr. Arvind Virmani will be an exceptional choice. Mr. Virmani holds a doctorate from Harvard University and has held several important positions including Chief Economic Advisor and India’s representative at the IMF. He is accredited with several research papers on areas of macroeconomic growth, international trade and capital markets. He will be a steady hand to guide the Indian economy in case a global crisis presents itself in the near future.

But like Mr. Alan Greenspan the former Chief of Federal Reserve Bank of United States, Mr. Raghuram Rajan has a mythical aura and fabled cult surrounding him. With so much support from various quarters, replacing him will be one of the toughest decisions on hand for the Prime Minister. But it is far better to bite the bullet today than risk a RBI Governor who has the ears of the world media, will be firing constant salvos against the government and one who will be extremely unpredictable during the next general election. What is the truth in the claim of some South Indian politicians that South is propping up North. 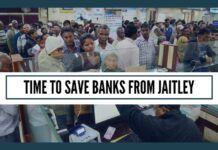