[dropcap color=”#008040″ boxed=”yes” boxed_radius=”8px” class=”” id=””]C[/dropcap]ongress vice president Rahul Gandhi on Monday blamed Prime Minister Narendra Modi for rising food prices and questioned his silence on the issue. “Modi is responsible for the soaring prices of pulses and other essential commodities. But his silence has shocked the people,” Gandhi told an election rally in Araria district.

“The Modi government has deprived the poor of dal, roti and ‘bhat’ (rice), not to talk about imposing other problems,” Gandhi said. “The poor curse this government.”

He said Modi talked about the poor but had made life difficult for them.

The Congress leader said the references to Pakistan during the ongoing assembly election in Bihar showed the desperation of the Bharatiya Janata Party (BJP).

Modi had failed to fulfil any of the promises he made during the 2014 Lok Sabha election campaign, Gandhi went on.

“He failed to bring back black money (from abroad) and provide Rs.15 lakh [$ 22,861.57]to every Indian. He failed to provide 2 crore jobs for youths annually. And he failed to check the prices of pulses and other food items.

“All this has caused a lot of anger. But Modi is still talking big and doing nothing.”

Gandhi expressed confidence that the Grand Alliance of the Janata Dal-United, Rashtriya Janata Dal and the Congress would win two-thirds majority in the 243-seat Bihar assembly.

He also accused the ideology of the RSS, the BJP’s ideological parent, and the BJP of dividing the nation.

“The philosophy of the BJP and the RSS is that Indian citizens should fight among themselves. That is their USP. There is no vision, no thought,” he told India Today TV. 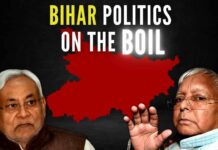