[dropcap color=”#008040″ boxed=”yes” boxed_radius=”8px” class=”” id=””]T[/dropcap]he Puranas describe Buxar as the battlefield of gods and demons. Politically speaking, ‘gods’ and ‘demons’ will fight it out here in the Bihar assembly elections too. The battle of Buxar district has turned out to be more than interesting as the official candidates of both the NDA and the Grand Alliance face stiff opposition from rebels in three of the four constituencies.

The Bharatiya Janata Party (BJP) has fielded candidates from Buxar, Rajpur and Brahmpur, leaving Dumraon constituency for Upendra Kushwaha-led Rashtriya Lok Samata Party (RLSP). On the other side, the Janata Dal-United (JD-U) is contesting from Rajpur and Dumraon, the Congress from Buxar and the Rashtriya Janata Dal (RJD) from Brahmpur. In 2010, the BJP won from Buxar and Brahmpur and the JD-U from Dumraon and Rajpur. They were allies then.

[dropcap color=”#008040″ boxed=”yes” boxed_radius=”8px” class=”” id=””]T[/dropcap]he Congress candidate from Buxar and RJD’s from Brahmpur are both first timers. Buxar has 29 candidates but the main fighters are BJP’s Pradip Dubey, 44, and Congress’ Sanjay Kumar Tiwari alias Munna Tiwari, 47, son of former union minister and Congress leader K.K. Tiwari. Supporters of former minister and three-term BJP legislators Sukhda Pandey are angry after she was sidelined. They are sure to trip the BJP.

The Bahujan Samaj Party’s Saroj Kumar Rajbhar, 30, and Ashok Yadav, a JD-U rebel, are also in the fray. And Yadav, now an independent, could hurt the JD-U.

In Brahmpur, the NDA and Grand Alliance are in trouble. BJP’s Vivek Thakur, 45, son of former union minister C.P. Thakur, has an enemy in outgoing BJP legislator Dilmani Devi, who joined the JD-U after she was not re-nominated. She is now campaigning for RJD’s Shambhu Yadav.

The RJD is in a mess too. It denied ticket to four-time former legislator Ajeet Choudhry, 61, who is now a BSP candidate.

In Rajpur, the only reserve constituency, there seems to be a straight clash between BJP’s first timer Vishwanath Ram and JD-U’s 2010 winner Santosh Kumar Nirala.

Ram is a nephew of former BJP legislator Ram Narayan Ram. The Samajwadi Party and the BSP are also in the fray, the former fielding ex-legislator Chedi Lal Ram.

“Rebels have made the fight triangular in at least three seats in Buxar. Only Rajpur will see a direct fight between the BJP-led NDA and the Grand Alliance. So, rebels could spoil the chances of the official candidates,” Alok Kumar, a long-time Buxar resident, told IANS.

[dropcap color=”#008040″ boxed=”yes” boxed_radius=”8px” class=”” id=””]M[/dropcap]unna Singh of Nawanagar doesn’t agree. “There are lots of issues in Buxar. People who live on the banks of the Gange drink water contaminated with arsenic. There is hardly any water in canals. People are dependant on boring water. Unfortunately, no one talks about these issues,” he moaned. “This election is being fought on caste lines,” he added.

Buxar will also witness an internecine Left war. Although the Communists have joined hands across Bihar, both Bhagwati Prasad of the CPI and Dhirendra Choudhry of the CPI-M are in the fray. 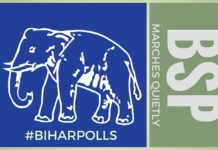 The elephant walks silently in Bihar No cakewalk for anyone, Bihar votes from today 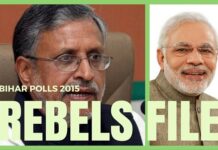