[dropcap color=”#008040″ boxed=”yes” boxed_radius=”8px” class=”” id=””]A[/dropcap]way from the strident calls of high-profile warriors, an elephant is silently riding across the battle-scarred landscape of Bihar polls. Not many feel it poses any threat to their prospects, but then poll pundits have always misread the potential of the force behind the jumbo—Bahujan Samajwadi Party (BSP) chief Mayawati.

The BSP’s poll symbol may be noticed only randomly in the rural areas of Bihar, but then Mayawati’s voters have unwavering commitment to their leader. They don’t wait for Mayawati to knock at their doors or party campaigners to grease their palms. The poor chamars, who constitute the main vote bank of Mayawati, are loyal to the last man/woman to the elephant.
Bihar has never been a favorite grazing ground for the elephants. Mayawati has unsuccessfully tried to expand her party’s base from Uttar Pradesh to the neighboring Bihar, but the rise of Ramvilas Paswan scuppered her chance to emerge as the leader of the entire Dalit community in the state. Just like Mayawati, who is an unquestionable leader of the chamars, Paswan is the Pope of dusadhs. Both these Dalits castes don’t see eye to eye with each other. As such it was not possible for either Mayawati or Paswan to expand their base beyond their immediate caste. But this also makes Mayawati a dangerous force. The chamars, who make up for nearly one fourth of the entire 16 percent of the Dalits and Mahadalit population, look at Mayawati as a leader who is for them and them alone.

The BSP chief is criss-crossing Bihar with clear message to her voters: Defeat the BJP and SP.

If they showed unflinching commitment to Mayawati in the past, the trend this time is unlikely to be any different, except the fact that now Mayawati is silently batting for the Nitish Kumar-led `grand alliance’. And this could mean a lot in a battle where every inch of gain is crucial.
In 2014, the BSP failed to open its account in Bihar, but logged 3.27 percent votes. In February 2005 , the party won two seats and polled 4.5 percent votes whereas in October 200 polls the BSP won four seats and got 4.75 per cent votes.

[dropcap color=”#008040″ boxed=”yes” boxed_radius=”8px” class=”” id=””]T[/dropcap]he BSP is using Bihar to prepare the turf for the 2017 Uttar Pradesh election , where it will be locked in triangular contest with the Samajwadi Party and BJP. Her purpose in this election seems clear: help the alliance of Rashtriaya Janata Dal (RJD), Janata Dal (U) and Congress defeat the NDA so that she would encounter a demoralized BJP in the battle of UP. At the same time, she is also targeting the Samajwadi Party, which floated third front after its chief Mulayam Singh Yadav made a surprise exit from the `grand alliance’. Mayawati knows that she has no threat from the RJD, JD(U) and Congress in UP where as the SP and the BJP are going be her main rivals when the state goes to poll in less than two years.
With that in mind, the BSP chief is criss-crossing Bihar with clear message to her voters: Defeat the BJP and SP.

While she accused Mualayam Singh Yadav of backstabbing “secular” forces at the behest of the BJP, she is trenchant in her criticism of the BJP for trying to communalize the politics. This time also, Mayawati is likely to return empty-handed from Bihar, but she could mar the prospect of many NDA candidates, and that could be crucial in an election where every seat could matter. 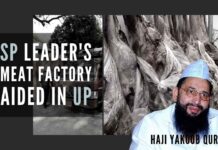