[dropcap color=”#008040″ boxed=”yes” boxed_radius=”8px” class=”” id=””]F[/dropcap]or ages, Padma awards were given on the considerations of excellence in various fields as well as political and ideological commitment of the recipient to the ruling dispensation. When the Congress was in power it nominated a plethora of BJP baiters and so-called `seculars’ for these awards. The Modi government followed the same tradition while creating the list of 110 such awardees on the eve of the Republic Day on Monday.
These factors are evident when one takes a close look at the awardees in all three categories — Padma Vibhushan, Padma Bhushan and Padma Shri. The government has also used the awards to reach out to the media. So, the chairperson of the Bennett Coleman and Company, the publishers of the Times of India group, Indu Jain, and southern media tycoon Ramoji Rao also figure in the list of Padma recipients. While Rao gets Padma Vibhushan, Indu Jain has to be content with a Padma Shri.
This year, President Pranab Mukherjee will confer 10 Padma Vibhushan, 19 Padma Bhushan and 83 Padma Shri awards on people from different walks of life.
As many as 19 awardees are women and 10 are foreigners, Non-Resident Indians and People of Indian Origin (including one posthumous). Four of those on the honor list are posthumous awardees.
[dropcap color=”#008040″ boxed=”yes” boxed_radius=”8px” class=”” id=””]H[/dropcap]eart throb of millions of movie buffs, Rajinikanth, founder of the Reliance empire late Dhirubhai Ambani, Art of Living founder Sri Sri Ravi Shankar, are some of the Padma Vibhushan awardees along with former Jammu and Kashmir Governor Jagmohan, former DRDO chief V K Aatre, cancer specialist and chairperson of Adyar Cancer Institute Dr V Shanta and eminent Bharatanatyam and Kuchipudi dancer Yamini Krishnamurthi and classical vocalist Girija Devi and Indian—American economist Avinash Dixit.
Rajnikant is a household name in Tamil Nadu which goes to polls in April-May this year and several parties are actively wooing him for support. Sixty-five-year-old Rajinikanth is one of the most popular actors, revered as a demi-god by fans across the country. He is a recipient of Padma Bhushan. The Tamil star has also acted in Hindi, Telugu, Kannada, Malayalam and Bengali films.
[dropcap color=”#008040″ boxed=”yes” boxed_radius=”8px” class=”” id=””]S[/dropcap]piritual guru Swamy Dayananda Sarswati, who passed away recently at his Rishikesh ashram, and founder of Chinmaya mission Swami Tejomayananda have been conferred Padma Bhushan awards. It is baffling why the duo did not get the Padma Vibhushan award when controversial business tycoon late Dhirubhai Ambani figures in that coveted list. The question will be asked whether their contribution in the field of spiritualism is any less than Ambani’s dubious record in exploiting the natural resources of the country.
The Government has decided to confer Padma Bhushan award on cine actor Anupam Kher, who was the face of the BJP campaign against “intolerance”. Cine personalities Madhur Bhandarkar and Malini Awasthi, who also led the Modi government’s campaign against ‘intolerance’, have been given Padma Shri.
Not a single person who even remotely disagreed with the BJP’s ideologies or raised the issue of `intolerance’ finds a place in the list of awardees.
[dropcap color=”#008040″ boxed=”yes” boxed_radius=”8px” class=”” id=””]I[/dropcap]t’s different matter that in his address to the nation on the eve of the Republic Day, President Pranab Mukherjee raised concerns over “intolerance” in the country and said it poses grave threat to the nation’s democratic traditions.
Former CAG Vinod Rai, sportspersons Saina Nehwal and Sania Mirza are also among the 19 personalities to get Padma Bhushan.
[dropcap color=”#008040″ boxed=”yes” boxed_radius=”8px” class=”” id=””]O[/dropcap]thers who will get Padma Bhushan award, announced by the government on Monday, are Udit Narayan Jha (art-playback singing), Ram V. Sutar (art-sculpture), Heisnam Kanhailal (art-theatre), Dr Yarlagadda Lakshmi Prasad (literature and education), Prof N.S. Ramanuja Tatacharya (literature and education), Dr Barjinder Singh Hamdard (literature and education – journalism), Prof D. Nageshwar Reddy (medicine-gastroenterology), Hafeez Contractor (others-architecture), Ravindra Chandra Bhargava (public affairs), Dr Venkata Rama Rao Alla (science and engineering), Indu Jain (trade and industry), Robert Blackwill (public affairs) and Pallonji Shapoorji Mistry (trade and industry). 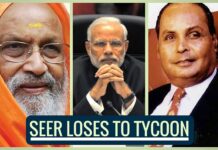 Padma awards: A seer loses to a business tycoon 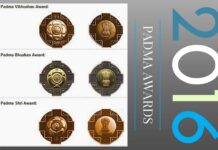 Maha Shivaratri: The concept of Creation in the Dance of Nataraja.