Ahead of elections, AAP workers engage in fistfight amongst themselves over ticket distribution

Ruckus was seen at the press conference of Aam Aadmi Party (AAP) leader Raghav Chadha in Jalandhar, Punjab amongst its own party workers. The AAP party workers surrounded Chadha and were seen fist fighting with each other over ticket distribution.

Journalist Man Aman Singh Chhina tweeted about it sharing the video at the conference. He tweeted, “Ruckus in AAP press conference in Jalandhar held by state co-incharge Raghav Chadha earlier this evening. Reports of fistfights among workers and protesters over ticket distributions.”

The AAP leader and co-in-charge of Punjab Raghav Chadha was holding a press conference when this incident happened. The AAP workers were seen pushing and thrashing each other in Jalandhar Press Club.

Supporters of AAP’s Dr. Shiv Dayal Mali, Dr. Sanjeev Sharma, and Joginder Pal Sharma also made serious allegations against the party leaders. When Chadha started announcing the joining of several leaders, the AAP workers, and party members who were dissatisfied with the ticket distribution process, raised slogans against Chadha and the party outside the Press Club.

Party’s Jalandhar leader Dr. Shiv Dayal Mali along with several other workers started protesting against the party. They blocked entry to the club by waving black flags and wearing a black band on their heads. They were holding posters “Stop giving tickets to tainted people” (written in Punjabi). 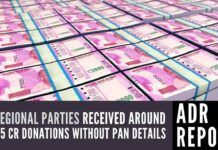