Part 1 of this series was about Crimea, Part 2, about Latvia and Part 3 was about Lithuania.
[dropcap color=”#008040″ boxed=”yes” boxed_radius=”8px” class=”” id=””]M[/dropcap]oldova is another country which is likely to go the way Ukraine did.  A slice of Moldova is called Transnistria and is the equivalent of Eastern Ukraine, where pro-Russian forces are strongest.  The nucleus of Russian support comes from the fact that a third of Transnistria’s population is Russian.  Russia also gives Transnistria $27m in aid25 which is very valuable since Moldova depends on remittances from Moldovans working abroad.  Russia refers to Transnistria as the ‘Pridnestrovian Republic.’ According to NATO’s Supreme Allied Commander General Philip Breedlove Russia has forces in Ukraine, and in Transnistria one must add, and is ready to take over Moldova.26            Fortunately for the region, Moldova has not become a casualty, like Ukraine, yet.

Moldova has seen other links with Ukraine.  With Ukraine, Moldova operates a Joint Customs Union through Transnistria under the auspices of OSCE.  In March, 2014, Russia took over Belbek Air base in Crimea and the Ukrainian Airforce commander Yuri Mamchur was taken a prisoner in the early hours of the morning.27

It appears that the ruling elite want to be part of the EU and NATO.  The partnership with NATO was set up under the Individual Partnership Action Plan (IPAP) which has to be renewed every two years.  Since March 2014, Moldova contributed troops to the Kosovo Force under the new Defense and Related Security Capacity Building (DCB) initiative.28   Russia’s Deputy PM Dmitry Rogoz warned Moldova that there would be ‘serious consequences’ if Moldova joined the EU.

[dropcap color=”#008040″ boxed=”yes” boxed_radius=”8px” class=”” id=””]B[/dropcap]ut in 2016 opposition leaders took to the streets and outside NATO office in the capital, Chisinau.  The protesters belonged to two leftist parties and one rightist.  They wanted fresh elections, an elected president, an elected parliament, and an alliance with Russia.29

Corruption is rife in Moldova.  Vlad Plahotniuc30 is the Berlusconi of Moldova. He has 4 national TV stations, 3 radio stations, private security forces, and luxurious hotels.  He provides the majority in Parliament.  His opponents, like Renato Usaty, note that he allegedly uses tactics of ‘raider attacks’ to enrich himself and control events in Moldova.31    To top it all, Moldova experienced the “mother of all scandals:” three banks, Banca de Economii, Banca Sociala, and Unibank had to be closed until explanations were found for the missing $1 billion, equivalent to 15% of the GDP.32 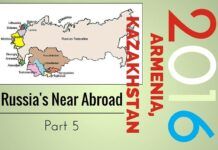