[dropcap color=”#008040″ boxed=”yes” boxed_radius=”8px” class=”” id=””]N[/dropcap]o development of a new state capital has generated so much excitement as has Amaravati, whose foundation stone was laid by Prime Minister Narendra Modi on Thursday. Amaravati, the capital of the great Satavahanas, the first great Andhra kings who ruled from 230 BC to 220 BC after the downfall of the Mauryan empire, is being re-born as the capital of Andhra Pradesh.

The backdrop in which Andhra Pradesh was bifurcated, the journey of the residual state from scratch, an experienced Chandrababu Naidu winning the public mandate, the selection of the Vijayawada-Guntur region for building the new capital, mobilisation of the best expertise and experience for the project have all added to the hype.

It’s a rebirth of sorts for Amaravati, an ancient city on the banks of the Krishna river in Guntur district.

[dropcap color=”#008040″ boxed=”yes” boxed_radius=”8px” class=”” id=””]A[/dropcap]n ancient centre of Buddhist learning, it boasts of Mahachaitya, the Great Stupa, with intricate carvings that depict the life and teachings of Lord Buddha, Buddhist sculptures and slabs with Buddhist inscriptions. By using the name Amaravati, Naidu managed to strike an emotional chord especially with countries like Singapore and Japan, where Buddhism is the most widely practised religion.

While Singapore has prepared three master plans for the Andhra capital and is ready to partner in its development, Japan has also come forward to contribute with its experience and technology.

“We in Japan from our young days have learnt that this great land of Amaravati was a great seat of learning for Buddhism right from 3rd century BC and here is where the seed of Japanese nation’s culture and values have emerged. In our text books we learnt that Nagarjuna (one of the most important Buddhist philosophers after the Buddha) visited the city,” said Japanese Minister for Economy, Trade and Industry Yosuke Takagi said at the groundbreaking ceremony.

“Amaravati is once again set to become a vibrant centre and great city and this time, Japan is here to help a lending hand with experience and technology here to contribute to this great city,” he said.

[dropcap color=”#008040″ boxed=”yes” boxed_radius=”8px” class=”” id=””]N[/dropcap]aidu believes the new capital has the strength of both the ‘vastu’ and the auspicious name. He even sprinkled water and soil brought from holy places of all faiths and from across the state with the hope that this will give further strength to Amaravati.

By organising the ceremony on a grand scale and on Vijaya Dasami, Naidu has made a strong pitch for what he promises to be a world-class city and people’s capital.

Using his experience in developing Hyderabad as an information technology hub, Naidu has embarked on a mission to build Amaravati as country’s first Greenfield smart city, an economic and business hub, en energy efficient and sustainable city.

According to the master plan for the Seed Capital Area (SCA), the core city will be spread over 16.9 square km.

The capital city has been planned for about 300,000 residents. Its first phase is expected to be completed by 2018.

Special emphasis has been laid on development of extensive walkways and pedestrianisation, interlinked with open and green spaces with a blue and green network of more than 25 kms to promote walk-to-work environment and non-motorised transport.

Naidu has invited companies from Singapore, Japan, China and other countries to participate in the development of the state capital, which needs over $2 billion.

With the process of designing and conceptualisation over, the real work on building the capital starts now. Naidu faces a challenge in mobilising the funds from the central government and investments from abroad.

With the Centre yet to clearly indicate when the state will get the special category status or special package, Naidu may have to wait longer to begin the real work to develop his dream city. 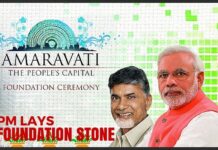 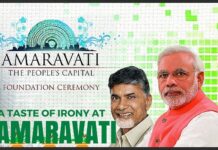 No compromise on the construction of Ram Mandir in Ayodhya: Hindu...

TMK… Music without Devotion is Poison….