The High Court verdict has raised hopes among victims of the 1984 massacre of getting more names to justice — the two most prominent being Kamal Nath and Jagdish Tytler.

Stung deeply by the conviction of one of its senior leaders, Sajjan Kumar, in a case of the massacre of Sikhs in 1984 in Delhi, the Congress has resorted to all sorts of deviations to contain the damage. One, it has dragged in the 2002 riots in Gujarat into the narrative. Two, it has claimed to have sidelined the accused long before. Three, the party has accused the Atal Bihari Vajpayee regime for having done nothing to bring justice to the victims of the killings.

The Vajpayee regime had set up a commission headed by the retired Supreme Court judge, Justice GT Nanavati, to probe the Sikh killings of 1984.

Let’s look at the first allegation. The Congress says that the BJP favored an accused, Maya Kodnani, in the Gujarat riots. The fact is that Kodnani, who was an MLA and Minister in the State, was convicted and sentenced to 28 years of imprisonment for her role in the violence. This was in 2012, ten years after the incident. In the Sajjan Kumar case, it took over three decades for justice to be done, because the investigating agencies dragged their feet following directives from the powers-that-be. Kodnani was acquitted by the Gujarat High Court in 2018. In the present case, Sajjan Kumar’s acquittal by a lower court has been set aside by the Delhi High Court. The contrast is glaring.

Now for the Congress’s assertion that it had cut Sajjan Kumar to size as a consequence of his alleged role in the 1984 massacre. Facts speak otherwise. The Congress gave him a Lok Sabha ticket to contest the election within a decade of the incident, and he won. He secured a ticket again in 1996 but lost. In 2004, the Congress selected him yet again to contest against Bharatiya Janata Party’s Sahib Singh Verma; he won by a huge margin.

He would most certainly have got a Congress ticket in 2009 as well, but for a sudden public outcry against his candidature. One Jarnail Singh, who later joined the Aam Aadmi Party, had flung a shoe at P Chidambaram during a Press meeting, protesting against the patronage to the likes of Sajjan Kumar and Jagdish Tytler, another Congress leader believed to be involved in the 1984 killings. But the Congress allowed him to wield influence after his brother and son got party tickets to contest Lok Sabha and Assembly elections respectively. But for the mass and media outrage and the arrival of Sheila Dikshit on the scene, Sajjan Kumar would have continued to be a major player in Delhi politics.

The third attempt at deviation by the Congress — demanding to know what the Vajpayee regime did to bring justice to the Sikh community — is an act of desperation. The Vajpayee regime had set up a commission headed by the retired Supreme Court judge, Justice GT Nanavati, to probe the Sikh killings of 1984. It was given a free hand and the report it produced could have become a basis for a number of further actions that the law enforcement agencies could have taken to bring the big fish into the net. However, by the time the report was ready, the Government had changed, and a Congress-led UPA regime was at the helm. Justice Nanavati’s report was submitted to the then Union Minister for Home Affairs, Shivraj Patil. Expectedly, the findings were largely not acted upon in the ten years that the UPA ruled. Incidentally, the Delhi Court, while convicting Sajjan Kumar, has made mention of the report’s finding related to him — the report had submitted that the police had not even recorded complaints of the victims and witnesses against Sajjan Kumar.

Although 49 life imprisonments have been handed out by various courts in the past 34 years, Sajjan Kumar happens to be the only high-profile senior Congress leader who has been convicted.

We then return to the present — the Delhi High Court verdict which ordered the conviction of Sajjan Kumar under various sections of the Indian Penal Code, including Section 302, and sentenced him to life imprisonment. The two parties were Sajjan Kumar & Others and the state through CBI. The court’s words are in themselves enough of an indictment of the Congress regimes — or those it backed — since 1984. After having hauled up the trial court for failure to take into account the evidence against Sajjan Kumar and for having acquitted him, the Bench said the following, besides using the term “political patronage”:

* “The mass killings of Sikhs between 1st and 4th November 1984 in Delhi and the rest of the country, engineered by political actors with the assistance of law enforcement agencies, answer the description of ‘crimes against humanity…”
* “There was an abject failure by the police to investigate the violence which broke out in the aftermath of the assassination of then Prime Minister Indira Gandhi…”
* “There was utter failure to register separate FIRs with respect to the five deaths that form the subject matter of the present appeals.”
* “This was an extraordinary case where it was going to be impossible to proceed against A-1 (Sajjan Kumar) in the normal scheme of things because there appeared to be ongoing large-scale efforts to suppress the cases against him by not even recording or registering them. Even if they were registered, they were not investigated properly, and even the investigations which saw any progress were not carried to the logical end of a charge sheet actually being filed.”

Although 49 life imprisonments have been handed out by various courts in the past 34 years, Sajjan Kumar happens to be the only high-profile senior Congress leader who has been convicted. The High Court verdict has raised hopes among victims of the 1984 massacre of getting more names to justice — the two most prominent being Kamal Nath (now Madhya Pradesh’s Chief Minister) and Jagdish Tytler. Senior lawyer HS Phoolka, who has relentlessly pursued the issue, said his team was “legally exploring how to go on with Kamal Nath’s case”.

The Nanavati panel observed in its report that the replies fielded by Kamal Nath had been “vague”; and that according to some witnesses, he had been seen among the rampaging mobs. This was in connection with an attack on Gurudwara Rakab Ganj. Two eye-witnesses had deposed against him. However, the panel stated that in the “absence of better evidence”, it was not possible to determine for certain his role in the incident. As for Tytler, the issue is already in the courts.

Sajjan Kumar’s conviction should worry the likes of Kamal Nath and Tytler, both of whom have vociferously denied any involvement in the massacre. But so had Sajjan Kumar. So far, these two have escaped an impartial inquiry. Its time truth is established to the satisfaction of all concerned. 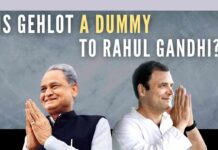 Article 35-A will go: Jihadis in Kashmir go berserk