Where does the word Hindu come from?

Vedic heritage traces no such name and the intrusion is a mystery shrouded in history. It is high time we rewrite our history eschewing the name Hindu which divides the great nation Bharat. People living in the regions of the Sindhu pronounced the alphabet ‘s’ as ‘hi’, they wrote ‘s‘ and pronounced it as ‘ha‘.

The western and middle eastern invaders who came up to the river bank region called Sindhudesh followed the same oral tradition using the sound ‘hi’ for ‘si’ thus coining the word Hindu and Hindusthan which ultimately abbreviated to India.

We must make the world know that there is no word Hindu or India in the entire Samskritam Nikhandu or Samskritam dictionary again, the Vedic culture being the strong foundation for our civilization, the word Hindu does not exist.

In the light of this deep-rooted evidence, we should let go of the word ‘Hindu’ and only pronounce it as Sindhu, the name attributed to the great River Sindhu. Simultaneously we should bring the Sanatana Samskara, which is a secular concept founded by a lineage of Rishis with great magnanimity.

Adi Shankara, two thousand years since our Aarsha Bharatam, revived and resurrected the Vedic ethos. Then came different dynasties, fragmenting the ‘Akhanda Bharatam’ into regions with varied languages, customs, rituals, and lifestyles with a common Vedic thread of spiritual lineage that kept the country under one umbrella of Sanatana Dharma and one meaningful name, Bharatam, the land which expels ignorance. The country as a whole never addressed itself as Hindu Rashtra or Hindusthan. It was only after the Islamic invasion, that name was introduced and a religious concept in line with Islam and Christianity was injected into our streams of belief. Shankaracharya also did not establish a religion or ever used that word in his everlasting and monumental works of Advaita Siddhanta.

Even though there had been a rivalry between smaller kingdoms in the Akhanda Bharatavarsha, none had attempted to invade or wage a war beyond the boundaries of Bharatam with the intention of looting others’ wealth in any form, materially or otherwise. The western world should realize that others invaded us on several occasions to loot our both material and intellectual wealth, exploiting our philosophy and deep-rooted benevolent character of ‘atithi devo bhava‘ which means ‘treat your guest as God’.

Finally, when the Europeans entered the country through the sea route, spread their wings, and brought the whole Bharatam under slavery, it lost its strength as a united Aarsha Bharatam.

Bharatam as a holistic nation was never a poor nation, both materially and intellectually. After flushing out the invaders we are now back to Aikya Bharatam, but mutilated by the bifurcation of losing one arm to the invaders in the name of Pakistan. One hopes that the day will dawn to reunite with the original Bharat and to regain the original nomenclature Akhanda Bharatam or Aikya Bharatam.

It is high time we eschew the hypothetical tag “Hindu, Hindusthan, and Hindumatham and stick to the name Bharata with Sanatana Dharma as our way of life. 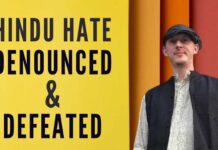 Rescue the Holy Cow or a Billion Dollar Market?

Why the eminent speakers at the press club may be wrong