[dropcap color=”#008040″ boxed=”yes” boxed_radius=”8px” class=”” id=””]E[/dropcap]mphasising the need for adopting alternate sources of energy to combat climate change, union Science and Technology Minister Harsh Vardhan on Saturday directed his ministry officials to ensure development of cost effective and efficient solar devices. “The problem of climate change can be tackled by adopting alternative sources of energy and science can play an active role for the purpose… develop more cost effective and efficient electrical lamps and other solar devices,” he told his ministry officials while inspecting the ‘Science Express – Climate Action Special’ train here.

The 16-coach train would travel about 19,500 km across 20 states to sensitise people on climate change as world leaders gear up for the environment summit in Paris from November 30 to December 11.

Vardhan also stressed the need for creating awareness about the importance of adopting alternative sources of energy in day-to-day life.

On October 2, India’s climate action plan pledged to cut emission intensity by 33-35% over the next 15 years. The action plans of different countries would serve as the basis of negotiating an agreement, applicable to all countries, with the aim of keeping global warming below 2 degrees Celsius. 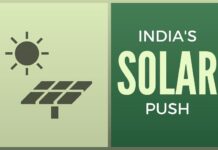 What is a Mega Watt Hour and why it matters