“The 12-hour shutdown passed off without any untoward incident despite protest demonstrations and rallies by the BJP cadres and VHP activists in the town,” Kodagu superintendant of police Vartika Katiyar told reporters here later.

Madikeri in Kodugu district is about 270km from Bengaluru across the southern region of the rich bio-diverse Western Ghats in the state.

Security was stepped up with the deployment of additional police forces across the town to maintain law and order.

“Ban order restricting assembling of more than five persons under section 144 of the CrPC has been extended to ensure peace and maintain law and order,” Katiyar said.”

Hundreds of BJP’s cadres, Vishwa Hindu Parishad (VHP) and Bajarang Dal activists staged a protest demonstration at T.G. circle in the centre of the town and took out a protest rally to the district’s deputy commissioner’s office against the state government for organising Tipu functions across the state.

[dropcap color=”#008040″ boxed=”yes” boxed_radius=”8px” class=”” id=””]M[/dropcap]eanwhile, state chief minister Siddaramaiah ordered an inquiry into the caning of a protesting mob in the town on Tuesday, as VHP’s district unit’s organising secretary D.S. Kuttappa, 60, died after he ran from the troubled spot and fell off a retaining wall and succumbed to head injuries.

“Mysore regional commissioner will conduct the inquiry into the incident, which resulted in the unfortunate death of Kuttappa,” Siddaramaiah told reporters in Bengaluru earlier in the day.

Police caned the mob and fired tear gas on it to avert a clash between protestors and supporters of Tipu function.

Protests were also held at Mysuru, Puttur and Mangaluru against the state government for celebrating Tipu’s birth anniversary.

The BJP, VHP and Bajrang Dal opposed celebrating Tipu’s birth anniversary, as the Muslim ruler was not a freedom fighter but a ‘religious bigot’ who forcibly converted thousands of Hindus into Muslims during his reign.”

Eldest son of Sultan Hyder Ali, Tipu (1750-1799) was also known as the ‘Tiger of Mysore’, as he fought against the British East India Company and Hindu kingdoms in the Deccan region to protect and enlarge his kingdom.

Tipu was killed in a battle with the British army in 1799 while defending his fort at Srirangapatna near Mysore, about 120km from Bengaluru. 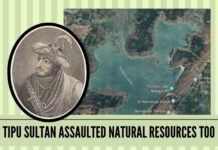