Demonetization, GST, Make in India and Direct Benefit Transfer are the most criticized reform programs of the Modi govt. So, are there, Mudra Bank Yojana, Swachh Bharat Abhiyan and Ayushman Bharat National Health Protection Mission inviting very contradictory comments from supporters and opponents of Modi. But there are many more development programs very successfully in operation, yet not much reviewed in media. Some of these are recounted below to see their objectives and the extent to which these have/will have succeeded.

Prime Minister Narendra Modi on April 28 this year, announced that the country had achieved its target of providing electricity to all its 597,464 census villages

Pradhan Mantri Jan Dhan Yojana, is a financial inclusion program of Government of India that aims to expand and make affordable access to financial services such as bank accounts, remittances, credit, insurance and pensions. This financial inclusion campaign was launched by the Prime Minister of India Narendra Modi on 15 August 2014. Beneficiaries, under the scheme, so far, zoomed up to 33,19.00.000

India jumped from 100 to 77 in the World Bank’s ‘Ease of Doing Business’ index and is ahead of neighbours China, Pakistan, Bangladesh, Nepal and Sri Lanka. World Bank president Jim Yong Kim congratulated the prime minister Modi for India’s historic rise and said it is remarkable that a nation of over 1.25 billion people achieved this rise of 65 ranks in the index in 4 years only.

Financial creditors, such as banks, have managed to recover Rs 47,768 crore, or a little over 55% of their claims, showed the data by the Insolvency and Bankruptcy Board of India, compiled on the basis of the inputs provided by resolution professionals (RPs). Operational creditors — including raw material suppliers — have received Rs 2,015 crore, making up for 61% of their claims.

Financial creditors, expectedly, made up for the bulk (96%) of the total claims admitted by RPs. “The IBC is way better than the earlier system, where recovery used to take a lot of time, and wherever a one-time settlement took place, the amount was usually not more than 20-30%.

In keeping with his Independence Day promise of electrifying all Indian villages, Prime Minister Narendra Modi on April 28 this year, announced that the country had achieved its target of providing electricity to all its 597,464 census villages. Lauding the “political effort over the last five years” that significantly accelerated the progress of electrification, IEA report termed this milestone as “one of the greatest achievements in the history of energy.”

There are three major components of Digital India: Digital infrastructure, digital literacy and digital delivery of services. By 2019, the Digital India project is expected to be fully functional.

The IEA also praised India’s success in enabling access to liquefied petroleum gas (LPG) to the poor households. “In India, 50 million free LPG stoves and initial refills have been provided to poor households via Pradhan Mantri Ujjwala Yojana since 2015, and the Government has set a target of providing LPG connections to 80 million households by 2020,” it said.

BharatNet, also Bharat Broadband Network Limited, is a Telecom infrastructure provider, set up by the government of India under Telecom department for the establishment, management and operation of National Optical Fibre Network to provide a minimum of 100 Mbps broadband connectivity all 250,000 Gram panchayats in the country, covering nearly 625,000 villages, to improve telecommunications in India and reach the campaign goal of Digital India. “BharatNet Phase-I”, connecting 100,000 village councils covering 300,000 villages, was on track for completion by December 2017. “BharatNet Phase-II”, will be completed by 31 March 2019, to connect the remaining 150,000 village councils covering 325,000 villages [1].

Pradhan Mantri Gramin Sadak Yojana is a Central government scheme. The primary objective of the PMGSY is to provide Connectivity, by way of an All-weather Road to the not connected Habitations far in the rural areas. In respect of the Hill States (North-East, Sikkim, Himachal Pradesh, Jammu & Kashmir, Uttaranchal) and the Desert Areas (as identified in the Desert Development Programme) as well as the Tribal (Schedule V) areas, the objective would be to connect Habitations with a population of 250 persons and above. Length of road constructed so far is 182,680 km

There are three major components of Digital India: Digital infrastructure, digital literacy and digital delivery of services. By 2019, the Digital India project is expected to be fully functional.

The Indian economy has shown sustained strong growth, as major reforms undertaken over the past few years are beginning to show results. Especially, after sending most stressed companies for resolution under the new Indian Bankruptcy Code, the government has also focused on a major recapitalisation package to strengthen public sector banks. The asset quality cycle is stabilising following the massive recognition of problem loans and their gradual resolution and provisioning. As per GST NEWS (17/11), bank credit growth rose to its highest in more than four years to hit 14.40 per cent for the fortnight ending October 12, 2018. Corporate India is seeing an earnings-rebound, as more than two-thirds of the Nifty50 companies either have met or beat the average estimate in September quarter. 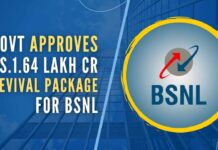 Government announces massive package of Rs.1.64 lakh crore for the revival of BSNL 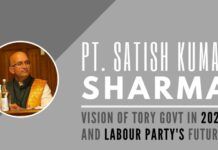