India’s World T20 campaign is over. More or less. When a team is hyped no end and cannot even pick a proper playing 11, it has disaster written all over it. The amount of pressure the players were under was palpable as they never got bat properly on ball – I am talking after looking at both Pakistan and the New Zealand games. Even though Kohli got a fifty, it was not assured – and today’s debacle is one for the records – on how to not bat.
So why was there so much pressure on them? And who was putting it? What happened to going out there and expressing oneself? Wasn’t playing a part of the IPL in Dubai a reason to get the players acclimatized to the grounds? Then what went wrong?

BCCI is not in the habit of doing introspection and coming up with a White Paper, so I am going to take a stab at some of the major things…

For the cricket lovers, tune out the tournament and get on with life. There is a pandemic that needs to be conquered. 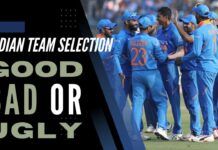 More on the Agusta Westland Scam and the kickbacks and Decoding...