BJP leader Subramanian Swamy has petitioned to the Vice President and Rajya Sabha Chairperson Venkaiah Naidu for terminating the Rajya Sabha Membership of newly elected MDMK Member of Parliament Vaiko alias V. Gopala Swamy, citing that he has violated the Oath and breached the Constitution of India by his anti-Hindi comments. In his letter, Swamy urged that Vaiko’s slurs against the Hindi language is a gross violation of Article 351 of the Constitution and this matter must be referred to Ethics Committee and Rajya Sabha should pass a resolution to “unseat” him.

Swamy who always terms Vaiko as a supporter of terrorist organization Liberation of Tamil Tigers for Eelam (LTTE) said that the Ethics Committee of Rajya Sabha must determine whether “he is fit to remain as a member of Rajya Sabha anymore.”

“His (Vaiko alias V. Gopala Swamy) widely published statement that Hindi is not a developed language and only book published as literature in Hindi is the Railway Time-Table. This is an aggravated insult to all Indians. He also demands that the Prime Minister should speak in Parliament in English only, which is also a slur on one of our National languages Hindi which is recognised under Article 351 of the Constitution of India as an official language or the Union of India. He has further said that Sanskrit is a dead language and it is useless to learn it, when Article 351 mandates the Sanskrit vocabulary should be used in Hindi. This is also a gross insult to the Nation,” said Swamy citing the recent provocative comments of Vaiko. Subramanian Swamy’s letter to Rajya Sabha Chairperson is published below this report.

“Mr. Vaiko has flouted the Oath he took (as Candidate) and upon election to uphold the Constitution. Hence it is highly objectionable and unethical breach of his Oath to uphold the Constitution, and a slur on the patriotic Indian people. Hence I think it is appropriate to refer this matter to the Ethics Committee and hold an inquiry to determine whether a Resolution should be passed by the House to unseat Mr.Vaiko from his membership of the House for his conduct unbecoming of a Member of the House,” said Swamy.

Subramanian Swamy’s letter to Rajya Sabha Chairperson is published below: 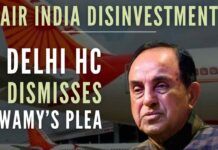 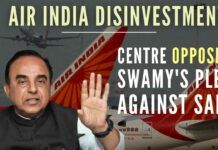 PDP-BJP try to find common ground to form a govt., one...