Amid all the focus on the presidential race it’s also important to keep in mind Democrats have a fighting chance to take back the Senate in November. There are at least 12 races in play. Win five, and Democrats are in control regardless of the outcome of the presidential election.

Many of of the Democrats on the ballot this year are progressives who have been fighting to raise the minimum wage, expand Social Security, provide paid sick leave and paid parental leave. Many are women and people of color who will make the Senate look more like the rest of America.

Win five of these races and we’d have a chance for a Supreme Court that would prioritize the rights and needs of average Americans rather than big corporations and overturn Citizens United!

Win five of these races and we’d put Senate oversight of the government back into the hands of people who care that government actually works.

We’d strengthen the ranks of progressives like Elizabeth Warren, Bernie Sanders, Jeff Merkley, Sherrod Brown, and others – who we are counting on in the fight to get big money out of politics, reduce income and wealth inequality, confront devastating climate change, and push a progressive foreign policy.

A Democratic Senate would also give us a line of defense, a countervailing power in budget showdowns, foreign policy lock downs, and threatened government shutdowns.

So please remember what’s at stake. And Vote on November 8th! 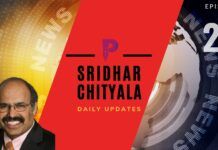 #Episode22 Daily Update with Sridhar – US Election Day – trends and much more!