[dropcap color=”#008040″ boxed=”yes” boxed_radius=”8px” class=”” id=””]A[/dropcap]s the intolerance discussions show no sign of abating, eminent scholar and Marxist literary theorist Aijaz Ahmad has joined the debate, saying that even top echelons of the society are taking cudgels against intolerance.
“It’s not a minor matter that RBI governor is raising his voice against intolerance. These are people who never protested like that. When the RBI governor talks, people all over the world listen to what he has to say even if the central government may not,” Ahmad told IANS on the sidelines of the Indian Languages Festival, ‘Samanvaya’, here on Thursday.
Ahmad said that the voices of protest against intolerance are not limited to the society’s intelligentsia.
[dropcap color=”#008040″ boxed=”yes” boxed_radius=”8px” class=”” id=””]E[/dropcap]arlier, delivering a lecture on the ‘Languages of a Nation’, the scholar expressed concern over the “atmosphere of fear” among artists and writers. “A.R. Rahman, perhaps the most original music genius in the country, says that he too has felt threatened over the past few months. Mumbai used to be the pride of our cosmopolitan aspirations. Over the years, it has degenerated so much and the atmosphere has become charged with fear,” he said lamenting the fact that Romila Thapar, India’s most renowned historian, had to deliver her lecture under police protection.
The scholar also flayed the attacks on actor Girish Karnad.
“We now live in a strange atmosphere. Karnad, who perhaps has received more awards than any other artist in the country, had to live under police security for making an off-the-cuff remark about naming of an airport,” he said.
[dropcap color=”#008040″ boxed=”yes” boxed_radius=”8px” class=”” id=””]A[/dropcap]hmad, a visiting professor at York University, Toronto, felt that there is an unprecedented response from even unexpected quarters. “What is more striking is how widely this sense of danger is shared. This is also the first time that some of the most eminent scientists have raised their voice on the same issues and expressed their sense of concern as to where the country is headed,” he said.
Ahmad said that though he had no intentions to speak on intolerance when he was invited to the event, he was compelled to do so because of the “explosion of certain issues specifically within the world of literature and social thought in the country”.
his speech, Ahmad also took a dig at the burgeoning numbers of literary festivals. “A new game of transnational commercial activity now straddles under the name of literary festivals. Their main function seems to be horse trading in authors and manuscripts while some sort of literary entertainment goes on in the front hall for star-struck consumers,” he said. 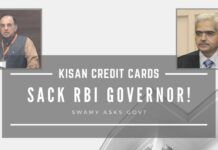 Subramanian Swamy slams RBI Governor for trying to sabotage the renewal of Kisan Credit Cards. Urges PM to sack him Govt. claims that it met fiscal, divestment targets in 2015-16