The world’s earliest tape recorder is this SPATIKA which gave us the wonderful Vishnu Sahasranamam.

Vishnu Sahasranamam:
Once way back in the 1940s or 50s, someone was interviewing Maha Periyavaa Kanchi Paramacharya Sri Chandrashekara Saraswathi Swamiji

That man recorded the interview using a tape recorder.

Periyavaa then posed a question.

“Does anyone know which is the oldest known tape recorder?” Nobody was able to answer. Then Maha Periyavaa asked another question.

“How did Vishnu Sahasranamam come to us?”

Someone said Bheeshma gave it to us. All agreed.

Krishna said, ‘It can only be done by Sahadeva and Vyasa will write it down.’

Then Maha Periyavaa posed another query.

“When all were listening to Bheeshma on the battlefield, who took notes at Kurukshetra?”

When Bheeshma was glorifying Krishna with Sahasranamam everyone was looking at him including Krishna and Vyasa. After he finished the 1000 Namas all opened their eyes.

The first to react was Yudhishthira. He said, ‘Pithamaha has chanted 1000 glorious names of Vasudeva.

All of us listened but none of us have noted it down. The sequence is lost’.

Then all turned to Krishna and asked for His help.

As usual, He said, ‘I also was listening like the rest of you. What can we do?’

Then all beseeched Krishna to help them recover the precious rendition.

Then Krishna said, ‘It can only be done by Sahadeva and Vyasa will write it down.’

Everyone wanted to know how Sahadeva could do it. Krishna replied,

‘Sahadeva is the only one amongst us wearing SHUDHHA SPATIKAM. If he prays to Shiva and does dhyanam he can convert the SPATIKA into waves of sound and Vyasa can write it down. Then, both Sahadeva and Vyasa, sat in the same place, under Bheeshma, where he had recited ‘Sahasranamam’.

Sahadeva started the dhyanam to recover the sound waves from the Spatika.

The nature of Spatika is that it will capture sounds in a calm environment which can be got back with proper dhyanam of Maheswara who is Swethambara and SPATIKA.

So, the world’s earliest tape recorder is this SPATIKA which gave us the wonderful Vishnu Sahasranamam. When Maha Periyavaar explained this all were stunned… From the Spatika recording, the grantha came to us through Vyasa. 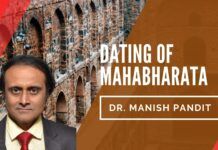 With Dr. Manish Pandit on 3 ways to compute the date of Mahabharat – Science, Astronomy & Scriptures

Why is TTD against The MirasiArchakas? The Protectors of Rituals and...