Delimitation Commission for Jammu and Kashmir?

Now there are demands from several quarters and a serious discussion is going on in the Central Government for the constitution of a new Delimitation Commission in Jammu & Kashmir to ensure that the electoral verdict reflects the wishes of the people in State. At present, based on manipulated parameters, Kashmir region with less number of voters and area has obtained the maximum number of seats (46) in the 87-member elected Assembly. Jammu region with more voters and more area is having only 37 seats in the state. This bizarre violation should end and Prime Minister Narendra Modi in his second term with the new Home Minister Amit Shah is learned to have considered this aspect.

Delimitation is a mandatory process every 10 years to verify the population and area of each constituency and re-draft its boundaries. This process is compulsory; to ensure the exact representation of the people. But in Jammu and Kashmir, this process has been shelved from 2002 in a dubious way.

Look at the fraud – even after forcing out the Kashmiri Hindus Kashmir region is keeping their names in the voters’ list to show inflated figures!

To eliminate the regional imbalance in people’s representation between Jammu and Kashmir regions, Centre is mulling appointing a new Delimitation Commission, which could result in an increase in the number of seats in the Jammu region. According to highly places officials, this was discussed at the recent meeting chaired by Union Home Minister Amit Shah, attended by Jammu and Kashmir Governor Satya Pal Malik, Home Secretary Rajeev Gauba and Intelligence Bureau Director Rajiv Jain. The high-level meeting decided to look into the legal options on the appointment of the new Delimitation Commission, as the Farooq Abdullah Government in 2002 passed a law in the state assembly to freeze the Delimitation process up to 2026.

As the State is under President’s Rule, with Governor’s report and Presidential ascent, Centre can bring a new Delimitation Commission and implement the same parameters in the entire state, which would result in majority seats from the Jammu region. Currently, different parameters were used in Jammu and Kashmir, which benefitted the Kashmir region with 46 seats out of a total 87 elected MLAs. Apart from the voter, a number of parameters, the area-wise parameter was also different for the Kashmir region when the last Delimitation process was undertaken in 1993. That time Jagmohan was Governor in the state when Centre was ruled by Congress, which was always pro-Farooq Abdullah.

However, Jagmohan was also favored by the Vajpayee Government. In 2002, when in an ultra-vires action, the Farooq Abdullah Government, which was an ally of the Vajpayee Government came out with an amendment to freeze the Delimitation process up to 2026! It is good that appeasing the Kashmir’s parties like National Conference and PDP has been stopped by the BJP-led Government at the Centre.

Srinagar Lok Sabha constituency has 12,94,560 voters and Anantnag  constituency 13,97,272 voters. Baramulla Lok Sabha constituency in the Kashmir region has 13,17,738 voters. Meanwhile, the number of voters in Jammu-Poonch and Kathua-Udhampur Lok Constituencies is 20,47,299 and 16,85,779, respectively. If the new Delimitation Commission implements, same parameters across the state, the number of seats would raise up to around 50 seats in the Jammu and Kashmir Assembly with the total number of 87 seats, leading to the total change in the political landscape.

Let us hope that the new Government of Narendra Modi will take a lead to start the new Delimitation process in the Jammu and Kashmir to bring justice in the representation of people in the State, which is still facing the follies of first Prime Minister Jawaharlal Nehru. 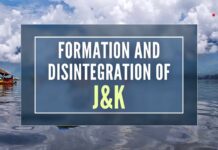 Antecedents of Aligarh Muslim University and why it deserves to shut...