The U.S. economy grew at an annual rate of 1.2 percent in the second quarter this year, which is below market expectation, the Commerce Department said Friday.

The growth in the second quarter was far below the market expectation of over 2 percent.

Companies were cutting back on their investments and reducing inventories amid uncertainty, while consumer spending remained robust, the Commerce Department said.

Consumer spending, which accounts for more than two-thirds of economic output, expanded at a 4.2 percent rate, the fastest growth since late 2014. It contributed 2.83 percentage points to the GDP growth in the quarter.

However, companies were prudent regarding their investments, which dragged the economy down. Gross private domestic investment went down 9.7 percent in the quarter, subtracting 1.68 percentage points from the GDP growth.

The Fed kept the federal fund rate unchanged this week, saying near-term risks to the economic outlook have diminished. Many analysts hold that this might indicate that conditions are getting more favorable for further interest rate hikes in the future.

But the lackluster growth report released Friday could be a concern for Fed officials on whether the economy could absorb a further rate hike. 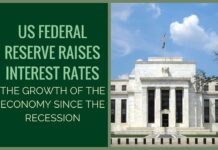 US Fed raises interest rates for first time since 2006