[dropcap color=”#008040″ boxed=”yes” boxed_radius=”8px” class=”” id=””]G[/dropcap]uwahati, Dec 24 – Anup Chetia, the self-styled general secretary of insurgent group ULFA who was extradited from Bangladesh in November, walked out of jail on Thursday after the Gauhati High Court granted him bail.

The founder general secretary of the United Liberation Front of Asom (ULFA) said he would soon leave for his home in Jeraigaon in Tinsukia district.

Lodged in the Guwahati Central Jail since November 23, Chetia’s release became evident after the Central Bureau of Investigation (CBI) submitted a no objection certificate to the high court on his bail petition on Wednesday.

I have spent half my life while fighting for the cause of Assam and its people. I shall look forward to work for the people of Assam in the days to come together with all the people and leaders of different organisations.
– Anup Chetia

The court had earlier granted him bail in three cases under the Terrorist and Disruptive Activities (Prevention) (TADA) Act.

The court, however, asked Chetia to be present in the court on December 28.

He was released from the Guwahati Central Jail after the high court granted him bail.

“It is a happy moment to be here after so many years in jail. I feel there is a need for a united democratic struggle with all the tribes and communities of Assam to secure the identity of the Assamese people,” Chetia told newsmen reading out a written statement outside the jail.

“I have spent half my life while fighting for the cause of Assam and its people. I shall look forward to work for the people of Assam in the days to come together with all the people and leaders of different organisations,” he said.

Chetia also invited the media to his residence in Jeraigaon.

Chetia, who was arrested in Bangladesh in 1997 for entering the country on fake documents, possessing illegal foreign currency and arms, was languishing in different jails in the country since then.

Last month, he was deported to India. On his arrival in New Delhi, the CBI arrested him for a murder that took place in 1988. 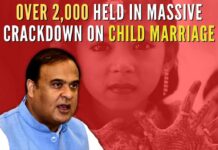 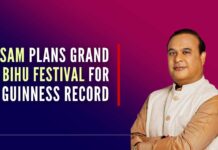 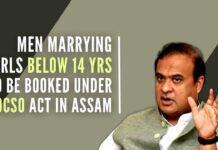 Assam: Men marrying girls below 14 yrs to be booked under POCSO Act