A grand temple being built on Ram Janmabhoomi, ‘something big’ must be done in Mathura too: Union Minister

The Krishna Temple in Mathura, the Janmabhoomi of Krishna was destroyed by Aurangazeb, a descendant of Babur, to construct the Idgah mosque. The army of Aurangzeb partly succeeded to demolish Keshav Dev Temple and construction was forcibly raised showing the might of power and said construction was named as Idgah Mosque.

Records from the Mughal administration from 1670 establish this claim.

BJP member of Parliament from Ballia, Ravindra Kushwaha, had also echoed the same views. “When the Modi government can repeal farm laws, it can also withdraw the Places of Worship (Special Provisions) Act, 1991 to pave the way for construction of a grand temple at Krishna Janmabhoomi in Mathura,” he had stated.

Deputy CM Keshav Prasad Maurya had also tweeted, “Foundations of a grand temple in Ayodhya and Kashi have begun, now preparations are being made for Mathura.”

The controversy over the Krishna Temple was triggered last year after a Lucknow-based lawyer and five others had filed an appeal in a Mathura district court, claiming that the mosque site is the birthplace of Lord Krishna.

A local court is hearing a bunch of petitions seeking ‘removal’ of the 17th-century mosque which was built by demolishing a part of the Keshav Dev Temple. 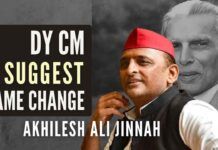 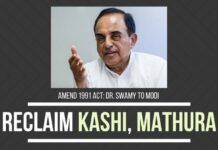 Subramanian Swamy urges for Amendments in the Places of Worship Act of 1991. Says the Act is against Fundamental Right of Freedom of Worship