Certain supporters of LTTE is behind this move against Lanka

The vote on a critical resolution against Sri Lanka at the UN Human Rights Council (UNHRC) in Geneva has been postponed to Tuesday, as Colombo stepped up efforts to garner international support ahead of the voting which is being seen as an acid test for President Gotabaya Rajapaksa. It is widely known that certain supporters of the erstwhile terrorist organization Liberation Tigers of Tamil Eelam (LTTE) are behind this move against Sri Lanka. By bold moves, Prime Minister Mahinda Rajapaksa’s regime as President in May 2009 eliminated the dreaded LTTE and its Chief Prabhakaran. LTTE was a dreaded terrorist outfit responsible for the three-decade-long chaos in the region and responsible for the death of thousands of people including India’s former Prime Minister Rajiv Gandhi.

The vote on the draft resolution titled ‘Promotion of Reconciliation Accountability and Human Rights in Sri Lanka’ was to be taken on Monday but officials in Geneva said it has been postponed to Tuesday owing to some scheduling issues, the Daily Mirror newspaper reported on Monday. Sri Lanka was defeated at three consecutive resolutions at the UN rights body when Gotabaya’s elder brother and incumbent Prime Minister Mahinda Rajapaksa was the country’s President between 2012 and 2014.

The Government of Gotabaya Rajapaksa had officially withdrawn from co-sponsoring the previous resolution undertaken by the previous government. It had called for an international investigation into alleged war crimes committed by both the government troops and the Liberation Tigers of Tamil Eelam (LTTE) during the final phase of the near-three-decade-long civil war that ended in May 2009. Sri Lanka has been assured of support from China, Russia and several Muslim countries including Pakistan, officials said. Ahead of the voting on the resolution, President Gotabaya and Prime Minister Mahinda made phone calls to world Muslim leaders.

President Gotabaya spoke to the Secretary-General of the Organization of Islamic Cooperation (OIC) Yousef A Al-Othaimeen while Prime Minister Mahinda telephoned Bahrain’s Deputy King Salman Bin Hamad Al Khalifa on Sunday. The Jeddah-headquartered 57-nation bloc of Muslim-majority countries is the second-largest inter-governmental body after the UN.

Foreign Minister Dinesh Gunawardena told reporters over the weekend that the whole resolution was politically motivated particularly by the UK. “Sri Lanka has made progress with preserving human rights with our own program of work hence the international community must assist us,” he said.

“We are trying to defeat the false accusations levelled against us, and many friendly countries have joined hands with us in this. We hope that India too, will support us this time,” Gunawardena said. The draft resolution calls upon “the (Sri Lankan) government to ensure prompt thorough and impartial investigation, if warranted, prosecution of all alleged crimes relating to human rights violations and serious violations of international human rights law.”

Michelle Bachelet, High Commissioner for Human Rights, in her report on Sri Lanka last month indicated that nearly 12 years after the end of the armed conflict, “domestic initiatives had repeatedly failed to ensure justice for victims and promote reconciliation. Despite commitments made in 2015, the current government, like its predecessor, had failed to pursue genuine accountability processes.”

On March 13, Prime Minister Narendra Modi and Sri Lankan President Gotabaya had a telephonic conversation during which they reviewed topical developments as well as ongoing cooperation between both the countries in bilateral and multilateral forums. Ahead of elections in Tamil Nadu next month, major political parties in the state urged Prime Minister Modi on Sunday to take a stand against Sri Lanka in the UNHRC session vis-a-vis the accountability and reconciliation resolution.

Pointing to news reports that Lanka was hopeful of India’s support at the UNHRC session in connection with the resolution, DMK President M K Stalin said Prime Minister Modi’s ‘silence’ over it has caused a big ‘shock’ among the Tamil diaspora and people in Tamil Nadu. MDMK (Marumalarchi Dravida Munnetra Kazhagam) and PMK (Pattali Makkal Katchi) also sought India’s support for the resolution. Stalin said India must not take a stand favouring Sri Lanka, which would be “an injustice” to Lankan Tamils.

In a statement on the UN rights Commissioner Bachelet’s report on Sri Lanka during the 46th session of the UNHRC last month, India said the assessment of the High Commissioner regarding developments nearly 12 years from the end of the conflict raises important concerns. “The Sri Lankan government has articulated its position on these issues as well, in the evaluation of these, we should be guided by a commitment to finding a lasting and effective solution to this issue,” the statement said.

Articulating New Delhi’s stand, Ambassador Indra Mani Pandey, Permanent Representative of India in Geneva, had said it rests on two pillars: Support for Sri Lanka’s unity and territorial integrity, and abiding commitment to aspirations of the Tamils of Sri Lanka for equality, justice, peace, and dignity.

{with inputs from PTI and Daily Mirror, Sri Lanka} 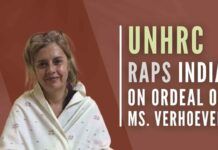 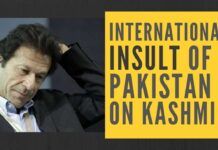