The West Bengal Assembly on Monday passed a bill that sought to replace Governor Jagdeep Dhankhar with Chief Minister Mamata Banerjee as the chancellor of all state-run universities, amid opposition by the BJP legislators. The bill was passed after 182 members voted in favour of the legislation and 40 against in the 294-member assembly.

State Education Minister Bratya Basu, after introducing The West Bengal University Laws (Amendment) Bill, 2022 in the House, said there was “nothing wrong” with the Chief Minister taking over as the chancellor.

As per rules, the bill needs to be sent to Raj Bhavan, even as Governor Dhankhar has already flagged the state’s moves as “unconstitutional”.

The enactment of the law will effectively mean that Governor Jagdeep Dhankhar will be replaced by Chief Minister Mamata Banerjee as the chancellor of the state-run universities.

“Why can’t the Chief Minister be the chancellor of state universities if the Prime Minister is the chancellor of a central university, Visva Bharati? You can go through the recommendations of the Punchhi Commission…,” he said, adding the Governor, who is the present chancellor, has violated protocols on various occasions.

Opposing the bill, the opposition BJP alleged that appointing the Chief Minister as chancellor would lead to direct “political interference” in the state’s higher education system.

“The state government wants to control everything. The decision to appoint the CM as chancellor of universities is being taken to facilitate direct interference of the ruling party in the state’s education system,” BJP MLA Agnimitra Paul alleged. 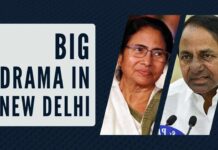 Naked dance of death of Democracy being played out in West...