[dropcap color=”#008040″ boxed=”yes” boxed_radius=”8px” class=”” id=””]W[/dropcap] ith the West Bengal assembly election a few months away, Trinamool Congress (TMC) supremo Mamata Banerjee is showing signs of weakening – which may ultimately tell upon her grand concept of a federal front at the national level.

Several factors, the most important of them being the CBI’s suddenly speeded up investigation into the Saradha chit fund case, have led to an uncomfortable situation where names of either some TMC functionaries or some other personalities known to be close to the party are now coming to the fore.

It must however be admitted that investigations are going on under orders from the Supreme Court and it is not the time for making any comment on the case. But the CBI’s recent cross-examination of Shankudev Panda, one of the general secretaries of the TMC, did result in knee-jerk reactions from the party. Within a very short time after Shankudev’s deposition, he was removed from all the positions he held in the party and the rank and file has been asked not to maintain any contact with him. The media in Kolkata is speculating that Shankudev has taken names of some big wigs in his deposition to the CBI.

The TMC has however advanced this argument: Shankudev has been removed to facilitate investigations. Then why did’nt the party remove Madan Mitra, a TMC bigwig, from the position of a minister when he was sent to jail? No answer is forthcoming.

It is, however, reliably learnt that except for Kunal Ghosh, a jailed MP, no other person has taken Banerjee’s name as a beneficiary of the Saradha scam. But the alleged involvement of some of her partymen have certainly weakened Mamata’s so long unquestioned hold over her party. Recently she took the initiative to patch up with Mukul Roy, an estranged general secretary, who still enjoys some amount of influence in the party. From Banerjee’s side, there was no urgent need for this. Both the BJP and the Congress had publicly expressed their reservations about admitting Roy into their fold.

Then there is the case of Subhendu Adhikary, the party MP who had organized the opposition to the CPI-M led administration in Nandigram. Adhikari was known to be extremely peeved as Banerjee had taken away the responsibility of TMC’s youth wing from him and handed it over to her nephew Abhishek Banerjee. Banerjee was so unnerved about Adhikary that she has recently been forced to declare that the latter would become a minister in the event of a Trinamul victory in the coming election.

Sources point out that Banerjee has become a bit shaky although she is confident of victory in the coming poll. But there is a murmur of disapproval within some influential MPs of the Trinamul Congress about Banerjee’s overdrive for forming a federal front at the national level. Interestingly Delhi Chief Minister Arvind Kejriwal is being uniformly favoured by almost all sections of the TMC as an ally at the national level, while the least acceptance remains for Lalu Prasad and Mulayam Singh Yadav. Some TMC bigwigs are still not prepared to forget Mualayam Singh Yadav’s somersault at the time of the last presidential election. It is also being generally felt in the TMC that Banerjee is still not mature enough for making political moves at the national level.

In her own estimation Mamata is prepared to write off the BJP’s prospects in the next election, an appraisal many of her party members are now not (rpt not) prepared to share. In the 2014 parliamentary election, the BJP had got nearly 17 percent votes and though its fortunes mostly plummeted in subsequent local body elections. Yet, two factors might infuse fresh vigour into it: selection of a hard core organizational man named Dilip Ghosh as the state party president and making Rupa Ganguly of “Draupadi” fame in-charge the state BJP’s women’s wing. Already, the BJP has started various agitational programmes.

The Congress, with its shrinking electoral base, may not pose any problems for the TMC. But the proceedings of the CPI-M plenum will be of interest to Banerjee. Party sources aver that her recent decision to meet Sonia Gandhi at Delhi was primarily meant to forestall any possibility of the Congress and the Left bloc coming close to each other. 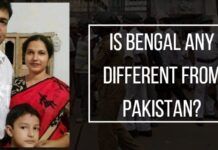 Murshidabad Slain couple’s family made to confess not a jihadi massacre; Is Bengal any different from Pakistan? 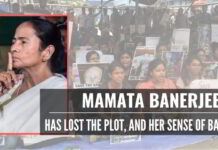 TMC trying to conjure magic to win West Bengal (or is...