Modi has given optimism, enterprise and resilience to Indians through his 3 disruptive reforming measures namely, Demonetization, GST and IBC.

What has Modi given to Indians in the preceding 4 years of his new govt.? It is optimism, enterprise and resilience. How? It is through his 3 disruptive reforming measures namely demonetization, Goods and Services Tax (GST) and Insolvency and Bankruptcy Code (IBC). All the 3 measures created disruptions in and gave jolts to the status quo ante. By flushing the system out, the Government got much of the money into the formal economy.

And at the same time, it forced discipline into the working of the economy. People have learnt to pay tax and repay commercial loans. It is also true that pressure on large loan-defaulters consequent to IBC, has increased very much and 12 largest of them are facing full force of law.

Demonetization is held by most intellectuals to be a monumental failure. The Reserve Bank of India has clarified that nearly 99 per cent of all the cash in circulation at the time of demonetisation was deposited in the treasury, and less than one per cent disappeared.

Indians with unaccounted cash, it now transpires, held their nerve and found more and more innovative ways to either deposit the cash in banks or exchange old notes for new notes. But, the cash deposits now have addresses and identities and their subsequent movements are all traceable since they happened within the banking networks. Rs. 23942 crores have already been seized by Income Tax authorities. At the same time, India’s tax departments, armed with new big data analytics and artificial intelligence software, is managing to track money movements far better than ever before. The new software has definitely made a difference in the way income tax systems work, and demonetization and GST have undoubtedly brought in more people into the tax fold.

Again, the main objective of demonetization was not just unearthing black money in cash. Rather, it was intended that the excessive holding of high denomination notes should be brought down for reducing the inflation particularly asset inflation in areas like real estate and gold. This has happened post-demonetization and prices of real estate and gold have come down substantially.

Finally. Demonetization has given an impetus for more and more digital payments. Terror funding has also apparently stopped.

As per IMF, all three engines of economic growth—consumption, investment and exports—will start firing from the current year.

India is now the 6th largest economy in the world on GDP basis and 3rd largest on purchasing power parity. It should become 5th largest on GDP basis, next year. As per IMF, all three engines of economic growth—consumption, investment and exports—will start firing from the current year. The CII-ASCON Industry Survey also predicts improved growth due to recovery in domestic demand and the investment cycle.

A new breed of Indian start-ups is increasingly stepping out of the safe haven of Indian shores to test uncharted waters. From cab-hailing companies and craft beer start-ups to homegrown quick service restaurant (QSR) chains, global markets are the new destinations for founders of these desi brands.

India now has a vibrant and growing economy. Its resilience, optimism and enterprise have all come into the fore and pushing it into new frontiers. But, currency crashes in Argentina and Turkey have triggered concerns of a global contagion, with renewed worries over the US-China trade war and the recent increase in the price of crude oil. Some experts say that Re is still overvalued. Be that as it may, RBI and Govt. have to tread very cautiously in this regard. 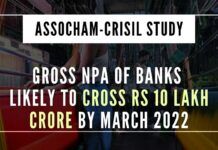