New World Wealth, a market research firm had in its 2017 report said that approximately 7000 High Net worth individuals left India for greener pastures. The countries most preferred by them (in order of decreasing number) are Australia, United States, Canada and the United Arab Emirates[1] (see Figure 1). The numbers include expatriates from all countries.

Why do the ultra-rich leave? Several reasons, some of which are listed below (not limited to India):

Which are the best performing countries where people became wealthy?

During the period 2016 to 2017, global wealth rose by 12% and the top three countries whose ultra-rich experienced a wealth gain is shown in Figure 2 below[2]:


This shows that the rich in India are indeed getting richer and getting richer faster! Do not get fooled by the growth numbers of Malta and Mauritius – these are merely recipients of wealthy expatriates.

How do they migrate?

Several countries such as the United States, United Kingdom, Canada, Australia etc. give a residence permit to individuals who can bring in a certain amount of money and start a business and undertake to employ a certain number of people. In the case of United States, the amounts are $500,000 for distressed areas and $1,000,000 for others. There are also some requirements that at a minimum a certain number of people (typically 10) must be employed by the entity[3]. Guess how long it takes to get an EB-5 based residency permit? Typically 3 years (for India). So it is a safe bet to assume that most of the applicants who made it to the US in 2017 applied during the UPA-2 regime. But there is a twist in the tale…

Did India make it easy for the Ultra-rich?

Absolutely yes. On May 26, 2015, the then RBI Governor Raghuram Rajan increased it to $250,000 per person, per year[4]! A family of four can now easily raise the required money in dollars to apply for a residency permit under the EB-5 visa. Is this going to come and bite India, with the sanctions being levied on Iran and a sudden crunch in the foreign exchange? Only time will tell.

How can India stop the exodus

India is the third largest economy based on Purchasing Power Parity (PPP) and is the fastest growing economy in the world currently. By making it easy for businesses to function, it will attract the best and the brightest from all over the world. In parallel, India must bring an ordinance (and then make it into law) the Nationalization of Illicit wealth held in tax havens[5]. This is a step-by-step process that must be done as detailed in 5 below. It would also prove that Modi is walking the walk after talking the talk (of bringing back Illegal assets parked abroad).

[3] About the EB-5 Visa Classification – USCIS.Gov 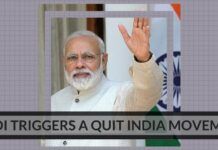