[dropcap color=”#008040″ boxed=”yes” boxed_radius=”8px” class=”” id=””]D[/dropcap]elhi has very high concentrations of respirable particulate matter (PM), even crossing the safety limits prescribed by the World Health Organization. While for some reason, the highest PM is routinely reported from some areas in the east of the city, no place is safe in the Delhi National Capital Region.

A rather startling fact which studies bear out is: Indoor air is generally 10 times more polluted than the outdoor air. So, where do we go? India has 13 of the world’s 20 most polluted cities, Delhi being on the top of all.

The presence of PM2.5 in Delhi’s air is an average of 153 micrograms per cubic metre against a safe national level of 60 micrograms per cubic metre and Ozone is 2/3 times the normal. More than 50 percent of Delhi’s vehicles run on diesel. We have dirty diesel with high sulphur content and this does not allow for diesel particulate filters (DPF) to be installed on the vehicles to reduce NOx (Nitrogen Oxide) and PM2.5 levels to acceptable ones.

This is the main cause of the problem. We need EURO 6 compliant vehicles and diesel with less than 10 ppm of Sulphur so that the DPF filters can work. The technology and capacity exist for such fuel and vehicles. It is a question of our will and priority to solve the problem.

Burning of paddy husk in Punjab towards end-October each year is the cause for beginning of the severity of pollution in Delhi. It is there throughout the year.

This is followed by Diwali celebrations with fireworks that cause pollution. Perhaps, a public display of fireworks at various locations in Delhi would be a substitute. On Diwali night of 2014, the PM2.5 was in excess of 8,000 micrograms per cubic metre. Let’s see what 2015 is?

Fireworks are fully loaded with harmful chemicals: 75 percent potassium nitrate, 15 percent carbon and 10 percent sulphur, that belch out toxic gases like NOx, Sulphur Dioxide (SO2), Carbon Dioxide (CO2), Carbon Monoxide (CO), Manganese and even Cadmium, besides Green House Gases (GHGs) which irritate the soft and delicate airways of the lungs and worsen the conditions of people with respiratory symptoms like Asthma, COPD, IPF, and Bronchitis.

When winter arrives, typically after Diwali, the temperature gradually starts dropping down. Burning of any waste – tyres, paper, and wood anything that can be burned – by security guards to keep them warm during a very cold night in Delhi – causes avoidable smoke and pollution.

These are among the provoking factors for childhood bronchial asthma, particularly in children between 6 and 12 years, and it has now been established that 26 percent of people, even without any prior history of respiratory ailments, develop symptoms of coughing, wheezing and breathlessness, especially during Diwali time.

The pollution dons a spectrum of health impacts for all, like wheezing; eye, nose and throat irritation; Asthma; disorder in the functionality of central nervous system; headache; cancer and more.

This toxic air has effects on pregnant women and children’s health. It restricts the growth of lungs and brain of the child (embryo). This results in slowing down the brain’s processing speed and behavioural problems.

[dropcap color=”#008040″ boxed=”yes” boxed_radius=”8px” class=”” id=””]I[/dropcap]n fact environmental exposures can cause infants to be born premature, or of low weight or born with certain birth defects. These babies are far more likely to die during infancy, and the survivors are prone to high risks of brain, respiratory, and digestive problems in early life.

The science behind this is: human brain cells are highly sensitive to the availability of oxygen as compared with other cells of the body. If deprived, they quickly begin to die. The major threats are very high PM2.5 and Ozone levels in Delhi’s air.

When there is a temperature inversion and warm air is unable to rise, warmer air starts moving horizontally towards the cooler zone where there are trees. Along with that warm air floats the PM2.5 and Ozone, further contaminating the air of these green patches.

One good example is Lodi Gardens, a green public park spread over eighty acres, in Lutyens Delhi. It has over 5,400 trees, which attract migratory birds during winter. The garden, a botanist’s treasure trove, has the National Bonsai Park located in it. Despite it looking green and hence misleadingly feeling good, the high count of PM2.5 and Ozone are really shocking, especially in the morning, when most people like to go for a walk in the Lodi Gardens. The situation improves in the afternoon when it becomes warmer.

People rely on greener areas for morning walks, jogging and physical exercises, and here it is what they are breathing. But Delhi’s air is carcinogenic, and air pollution is the silent and invisible killer. It is like being continuously exposed to invisible x-rays! Out of sight is out of mind.

Needless to say, you will find hospitals and healthcare centres filled with patients having health problems pertaining to air pollution between Diwali this month and Holi in March.

Who is at the highest risk? The staff of Delhi Police, Delhi Jal Board, bus drivers, slum dwellers, petrol pump attendants, electricians, NDMC, PWD, DDA and MCD workers, cleaning staff, and the citizens travelling in buses and autos.

It is the bottom of the pyramid in Delhi that is affected most.

But who cares for them? These are the people who do not have the luxury of quitting their job and leaving Delhi. Then what can they do? They need to breathe. It is their right. 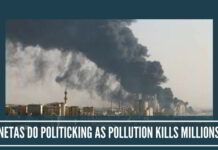 Over 1 million killed in road accidents each year: WHO