The grapevine says Naqvi is to be the next Lt. Gov. of J&K

When New Delhi is agog with speculation that Mukhtar Abbas Naqvi will be the candidate for the Vice President of India, hopes are receding… Will he be the Lt Governor of J&K? Two days after he resigned as Union Minister of Minority Affairs, Mukhtar Abbas Naqvi vacated his official residence, 7 Safdarjung Road on Sunday. The type 8 bungalow, which is allotted to Cabinet ministers, saw a stream of well-wishers and supporters arrive to wish the Modi government’s only minority face before he left in the evening. Naqvi has moved to a personal flat in Delhi. His close aides say he had at least six months before needing to vacate the bungalow. With many others keeping their bungalows for years even…

All these appear to be steps to ensure that the 2024 elections produce the required mandate for the BJP to continue to be in power. Much water will flow between now and then and we will wait and see… 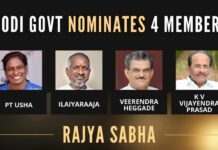