In the judgment, the Supreme Court declared Aadhar is not mandatory for getting a mobile number or to open a bank account.

Though the Supreme Court endorsed the Constitutional validity of Aadhar, the way Rahul Gandhi and Arun Jaitley interpreted the judgment gives rise to doubts that whether these two leaders know what they were talking.

Jaitley was correct when he said everyone who has been criticising Aadhaar should understand that they cannot defy technology.

Rahul Gandhi tweeted “For Congress, Aadhaar was an instrument of empowerment. For the BJP, Aadhaar is a tool of oppression and surveillance. Thank you Supreme Court for supporting the Congress vision and protecting”. On the other hand, Arun Jaitley said, “Congress cuts a very sorry figure here, they introduced the idea but they did not know what to do with it”.

It is common for politicians to interpret any judgment to suit them. Even by these standards, these comments were really off the mark. The fact is both are wrong. One can say Aadhar is Chidambaram’s brainchild. He knows what he was doing. Had Congress won in 2014, by now Aadhar would have become a massive tracking tool. BJP simply copied the idea of Chidambaram but pursued it brazenly.

Criticism of Aadhar was there even during UPA and so Chidambaram was not fully using the new weapon he constructed. He was waiting to push it slowly but steadily. First, let people get used to it for benefits. Later-on squeeze them. They can’t go back. BJP started using Aadhar before the incubation period is completed. So, they had to face the wrath for linking it to everything. Jaitley was correct when he said everyone who has been criticising Aadhaar should understand that they cannot defy technology.

Then there are some people who are not Taxpayers/Tax Assesses. And, many of them need Aadhar for availing the benefits of various schemes. How the government pays subsidies? By transferring money directly into their accounts. Using what? The same Aadhar number that is not mandatory. How does the beneficiary know he received money in his account? Through a message on his mobile number that is linked to the bank account. Is the link between Aadhar, Bank Account and Mobile Number not complete?

The only point where Chidambaram faltered was in not converting PAN into Aadhar. Simply by adding biometrics, PAN could have doubled as Aadhar

Now, how many people don’t fall in either category? Very few. Perhaps, Supreme Court Judges should have spent some time in understanding how the system works.

A few days ago, a scam borne out of a rumour that the Government is giving money to every girl, thousands of people spent their money on filling forms, taking photos etc., in UP. The moment government says student scholarships are through direct benefit transfer, most students would open a bank account and enter the Aadhar network. So in the end, what will be the result? It is anybody’s guess.

It is not for nothing even his enemies admire Chidambaram. It takes more intelligence to execute the scams his family was named in. The only point where Chidambaram faltered was in not converting PAN into Aadhar. Simply by adding biometrics, PAN could have doubled as Aadhar (In IT terms, one key field can be reduced by saving a lot of memory). That way, everyone in need of benefits would get not only get Aadhar but also register with IT. No Supreme Court could reverse that process.

Now, if the Supreme Court’s ruling blunted India’s “most effective tracking system” was it due to Chidambaram’s oversight? Or, should I blame Nandan Nilekani, for not pointing it out to Chidambaram? 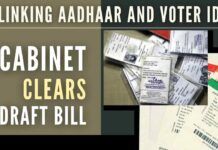