Well, the “Return of Taliban” is now complete. The usual experts on foreign affairs were left too stunned to search for words. Most of these paper-pushers could not understand what they were dealing with. Even if few of them were aware, they care only about their own positions. The point is, even the Taliban has evolved in the last two decades. They learned the art of manipulation, well, from the so-called champions of democracy, the US, and its European allies. True to their name, the Taliban were good students and learned the art of international diplomacy very fast. Of course, new-age technology provided by their enemies helped them to establish and consolidate their position as the only team that can create a truly Islamic state. While Talibs were studying Americans, Americans were studying Talibs and perhaps tried to think like them. What else can explain Joe Biden’s three-month-old statement declaring Afghanistan has an army of 300,000 able soldiers who can easily tackle the Taliban[1]? It is another matter that he squarely blamed Afghanistan’s army even before Kabul fell down. But what can one expect from the old man?

Taliban takeover was clear even before they started their blitzkrieg. Imran Khan publicly said the Taliban will not discuss with the present president[2]. This means, the Army of Pakistan, one of the few elements that can exercise some influence over the Taliban has wanted a regime change. Pakistani Army is not as sophisticated as the Americans to deal with both the ruling regime and Taliban simultaneously. So, all the reactions by the so-called world leaders and experts were either hypocritic or really they are naïve.

When asked Taliban simply said they appreciate what India has done to help the people by creating the infrastructure and referred to the experience of America on having a military presence.

Meanwhile, the liberal press from the western world started selling copies by criticizing the world leadership for deserting poor Afghans to suffer at the hands of the Taliban[3]. Well, it is the same press that allowed OPED space to Taliban leaders. The same press declared the Modi government’s vision is at odds with the goals of India’s founders. In the coming months and years, the same liberal establishment in the west will start fundraising to support the “internally displaced persons” in Afghanistan. How much money will finally reach the needy can be guessed by anyone. Meanwhile, someone from the team of Justin Trudeau, the poster boy of the liberal world, has announced Canada will permanently resettle 20,000 people from Hindu and Sikh communities of Afghanistan[4]. So, if Canada does it, it is humanity. It is fascist only if India enacts the CAA. Maybe it is time for the Indian government to modify the CAA and remove the cut-off date being 2014.

The funny thing about the western world and the media is these people celebrated a few years ago when the ruling governments and dictators were displaced. One can’t celebrate the killings of Mussolini and Saddam Hussain and cry for others. Has the life of people in Egypt, and Libya improved after those movements in various squares? It is so true that a section of people in these countries suffered during the dictator’s rule. These movements ensured the suffering is uniformly distributed. By the way, from where the Taliban emerged? Was it not from the Mujahedeen created by the Americans obsessed with their anti-communist dogma?

Shortly, Afghanistan will enjoy the attention of the Islamic world, like the status of Pakistan when it was carved out of India. Given the fact that Wahabi-dominated Saudi is slowly mellowing down, Afghanistan will be more attractive to all fundamentalist elements in the Middle East. Mahathir Mohammad, former President of Malaysia seems to be free now and can very well become an advisor to the new regime.

Taliban 2.0 is not like the earlier version. 2.0 is a much more refined, bug-free, flexible, highly adaptative, and intelligent one. This is the reason why there are no gory photographs of people hanging from electric poles this time. They denied any opportunity to the rest of the world to accuse them of any barbaric acts. They even denied the news of marrying girl children to their fighters. They are suave, or at least their spokespersons are. Whoever is guiding the present set of leaders of Taliban, he was a highly intelligent and experienced hand in international politics. Except for China, in the present scenario, there are none of the influencers of the Taliban who can engineer and execute such a bloodless coup.

One example of the finesse of Taliban 2.0: Some people suggest India should send the military to Afghanistan. When asked Taliban simply said they appreciate what India has done to help the people by creating the infrastructure and referred to the experience of America on having a military presence. It is an open book for India, he remarked. No threats, no warnings. Just leave it to your imagination and interpretation.

Yes, this is a bloodless coup. This was designed to deny the opportunity to the world not to deal with them. Some countries including India have already declared any government by force will not be recognized. Already Barkha Dutt declared the coup was bloodless and expected all governments to accept them. I have to agree with that opinion. Now don’t ask me if she had prior information on the coup being a bloodless one. She is one resourceful lady. There will be no calls to the world to fight the Taliban. Any such calls are just pretentious.

First, Pakistan, China, Turkey, and few other Islamic nations will recognize the Taliban. Slowly, but steadily not only the Islamic world, but even some other countries influenced by China will recognize. Why? Because there will be no evidence that the Taliban is suppressing Afghans. Already diplomats and the western press flew away from Afghanistan. There will be selective leaks of happenings in the future – of how poor Afghans need food, rations, and clothes, etc. In the immediate future, help from the Middle East will pour from fundamentalists and those really concerned about Afghans. Who can manoeuvre this whitewash better than China? China will have access to the natural resources of Afghanistan. They will have access to other countries through Afghanistan. CPEC (China–Pakistan Economic Corridor) will be extended to include Afghanistan. All in the name of helping Afghanistan. In return, the Taliban, Pakistan, and other Islamic nations will forget about Uyghurs.

NATO will be pitched against the Chinese-controlled axis. This will be more intriguing because the Chinese are exactly not a Communist country. China functions by a strategic configuration of Communist government that does business in a Capitalist way. Add to that the few Islamic nations and some more third world countries. You have a strong coalition. NATO will be confused about whether to grant aids to these countries or to fight them? So, NATO nations, by virtue of being democratic will end up doing both. They fight this coalition while sending aid to the people. Thus, they will lose whatever remaining credibility. Welcome to the Cold War 2.0.

Coming to India, notwithstanding what the Taliban said, sending Army to Afghanistan should never be considered. Of course, the way BJP left its workers at the mercy of TMC post-Bengal elections, one can expect the Indian Army not to go to Afghanistan. Still, just remember the IPKF affair. At the same time, India should be active in helping the people and even the Taliban will accept this. There were talks of Taliban will join hands with ISI and coupled with China, the militarily pressure on both sides of J&K will be more. Unfortunately, this is true and is a challenge to the Indian government.

In such a scenario, who will be supporting India? Maybe Saudi Arabia. I am discounting America because what India needs is more than what America can offer. And Biden’s establishment may not even offer all that they can. For Saudi, it is exactly the same problem. On one side, their customers are in the West, and on the other side, a part of the Muslim world is supported by China. And they need to worry about their own people. Perhaps, in the near future, Saudi may act drastically forbidding travel by people from some countries ignoring their religious obligations. After all, it is now a question of their survival. 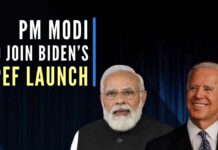 Media and ‘Sense of Proportion’