Espousing VVPAT in EVMs, will it put an end to complaints?

[dropcap color=”#008040″ boxed=”yes” boxed_radius=”8px” class=”” id=””]A[/dropcap]fter the Supreme Court asked the Election Commission to implement the Vote Verifier Paper Audit Trail (VVPAT) in electronic voting machines (EVMs) to ensure 100 per cent transparency in elections, and the Central Government sanctioned the money required to buy enough machines to conduct all future elections with these new machines, we may have thought we have resolved this issue once and for all. But have we?

Given the kind of complaints made by many of the opposition parties, many knowledgeable people wonder whether even VVPAT would put an end to EVM complaints.

Let’s see how the EVM with VVPAT works. When a voter presses a button in the EVM, a paper slip is printed through the VVPAT. The slip contains the poll symbol and name of the candidate. It allows the voter to verify his/her choice. After being visible to the voter from a glass case in the VVPAT for 7 seconds, the ballot slip will be cut and dropped into the drop box in the VVPAT machine and a beep will be heard.

What if a political party which expects to lose the election were to ask many of its cadres to simply complain after they have voted that, immediately after they pressed the button in favour of their candidate, the EVM showed a printout of a vote in favour of a competing candidate? That is, what if many voters deliberately make false complaints?

[dropcap color=”#008040″ boxed=”yes” boxed_radius=”8px” class=”” id=””]I[/dropcap]n the 7 seconds of viewing the VVPAT, the voter doesn’t have time to complain to anyone. And even if she/ he complains to the EC officials around, no one else can verify if the complaint is true: neither there is enough time for anyone to verify (within these 7 seconds), nor does the process permit anyone including election officials to view the choice made by any voter.

The reason for the introduction of VVPAT is not to make EVMs hack-proof. The EC (and most neutral observers) believe they already are, or at least, the contrary has not been proved.

And even if we assume hypothetically that both these obstacles are overcome somehow, if the complaint is false and the verifier calls the bluff on the spot, he/ she can only do so privately; neither of them can disprove the other in any court of law – it will simply be one person’s word against another’s. Of course, this is just hypothetical as voting by a voter can’t be viewed by any official officially.

The reason for the introduction of VVPAT is not to make EVMs hack-proof. The EC (and most neutral observers) believe they already are, or at least, the contrary has not been proved. So, the EC cannot add any new security features, unless and until someone exposes its fault lines if there are any; how to you improve something unless you know what’s faulty about it?

The EC only seeks to dispel the genuine doubts of voters. While VVPAT will convince the genuine doubters, the not-so-genuine who question the EC despite knowing that it is working just fine would insist that they had voted for their own candidate but the machine printed a vote in favour of their adversary. There is no way a court can adjudicate on this later in a court of law, since there is no way to show what symbol the paper trail showed before dropping into the box, even with VVPAT.

Let’s assume the EC adds some additional features into the EVMs with VVPAT. For example, let’s say the machine is programmed to reveal later who this person had voted for if ordered by a court. Even this won’t solve the problem.

[dropcap color=”#008040″ boxed=”yes” boxed_radius=”8px” class=”” id=””]T[/dropcap]he complainant can deliberately press a competing candidate’s symbol and insist that she/ he pressed her/ his own candidate’s symbol, but the VVPAT printed the wrong symbol. If a court verifies it later, the voter will be proved right because the voter (who only wants to prove EVM wrong) would have deliberately voted in favour of the wrong candidate and claimed that she/ he voted for her/ his own candidate. How can the EC prove to the Court that the vote cast digitally was the same symbol as the one on which the voter had physically voted by pressing a button?

Let’s say we add a ‘Stop My Vote’ button in the EVM. Once a vote is cast by a voter, if VVPAT were to hypothetically print a wrong symbol, the voter can immediately press the ‘Stop My Vote’ button before the Polling Officer completes it. The EVM can then invalidate the last vote; VVPAT paper vote also should be invalidated, say by cutting it, or by marking a special symbol like ‘?’). Though it is possible to permit the same voter to vote again with the EVM, some people could misuse it, frustrating the polling process. So, such voters may have to be allowed to vote using a paper vote separately. Won’t we be increasingly complicating things, yet without solving the problem?

Let’s assume we go back to the paper voting system as some parties demand. We know that this process can be subverted, especially by the ruling party in any state, by booth capturing and rigging the election results massively, as they used to in the yester years.

So, what can the EC do to conduct free and fair elections and not give room for anyone to complain? Though the EC may be doing a very good job already and may have a reasonably fool-proof system in place, it may not be easy to answer every complaint, especially the dishonest ones. How much verification (as a percentage) of EVMs is enough? 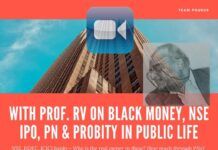 Conversation with Prof. RV on Black Money, Foreign Ownership in NSE and Probity in Public life The EVM-VVPAT is here. How to ensure an error free election

A new era has begun for Jammu & Kashmir and Ladakh:...