[dropcap color=”#008040″ boxed=”yes” boxed_radius=”8px” class=”” id=””]B[/dropcap]elgium has launched an ambitious project to power 170 trains by wind energy — and the first seven of the planned 25 turbines entered service on Saturday, local media reported on Sunday. Sudpresse newspaper group said turbines will be built along the main rail line from Leuven to Liege, generating enough power for every high-speed and local train using the line. The number of trains to be covered by the wind energy project represents about five percent of the country’s total rail traffic, Belgian railtrack operator Infrabel said.

Belgian broadcaster RTL reported that once all 25 turbines are operating, they are expected to produce 35,000 megawatt hours — enough energy to power 10,000 homes. About two-thirds of the produced electricity is needed for the rail line and the surplus will be added to the domestic electricity supply grid.

Philippe Van Troeye, production director at Belgian energy firm Electrabel, told reporters on Saturday: “Wind energy, like solar power, is intermittent, but it will play a more and more important role in our energy provision in the future.” 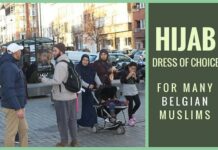 In the heart of Europe’s ‘terrorist hub’, youth alienation keeps nerves on edge