[dropcap color=”#008040″ boxed=”yes” boxed_radius=”8px” class=”” id=””]I[/dropcap]ndian Government’s crackdown on controversial Islamic preacher Zakir Naik’s Peace TV is a classic case of lazy attitude of the system. Though Ministry of Information Broadcasting put advisory to all cable operators across the country through state governments to stop the illegal airing, nothing has been done to stop the web streaming of the non-licensed Islamic preaching channel Peace TV.

In India, Peace TV still available through its website http://www.peacetv.tv/ transmitting the tv channel’s controversial preaching and seeking viewers to donate money to its bank accounts in London for the welfare of Islam and its causes. Stopping the controversial websites is just matter of hours for Government of India’s departments under Information Technology and it has specific units like CERT.

For several days there was a brouhaha about year-long illegal transmission of Peace TV after the Dhaka blast, when some terrorists were found to be followers of Zakir Naik. Stopping transmission through Cable TV networks is a state police’s job and needs ground level monitoring. Basically, Peace TV is aired in Cable TV networks where there is Muslim majority population. It is a known thing that TV channel agents bribe these unscrupulous Cable TV operators to carry the signals of non-licensed channels.

Through messages in Peace TV, which happens once every 30 minutes and scrolling below the screen, Zakir Naik urges Islamic brethren to donate generously to Peace TV or his organisation Islamic Research Foundation International (IRFI). He also urges viewers to donate to United Islamic Aid (UIA), a project operated by him. Separate bank accounts are shown for each of these purposes.

[dropcap color=”#008040″ boxed=”yes” boxed_radius=”8px” class=”” id=””]A[/dropcap]ll these bank accounts belong to Islamic Bank of Britain’s branch in Coventry Road in Birmingham, UK.  The minimum amount of donation sought is $250 or Rs.10000 per person. The transmission of his TV channel though internet is very convenient for Zakir Naik’s organisation to collect money through net banking.

Union Home Ministry is also now probing into the funding of Zakir Naik and his IRFI. Naik is already summoned by Mumbai Police and he had declared that this year he is not coming to India. The question is why the Centre is not blocking this controversial organisation’s website which gives live web streaming of Peace TV, which enables collection of huge money from his followers? This is a classic example of the lethargic attitude on part of India’s probe agencies and law enforcers. When you ban the TV channel’s illegal transmission through cable networks, you have to simultaneously block it on the internet too. Bureaucracy needs to act with common sense. 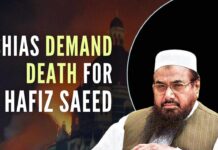 My New Letter Series – Dear Justice Pardiwala, Your Honor Is...