[dropcap color=”#008040″ boxed=”yes” boxed_radius=”8px” class=”” id=””]T[/dropcap]amil Nadu is in for a bout of political uncertainty following the appointment of Sasikala Natarajan, the live-in companion of late Chief Minister J Jayalalithaa, as the General secretary of the AIADMK. The General Council of the AIADMK which met at Chennai on December 29 unanimously appointed Sasikala Natarajan, who is addressed in reverence as Chinnamma by the party cadre and leaders, as the General Secretary in place of Jayalalithaa.

The media in India is afraid to highlight these issues as it may affect the prospects of them receiving advertisements worth millions of Rupees to be released by the AIADMK government.

The reasons put forward by the AIADMK leaders for appointing Sasikala Natarajan (who has conveniently changed her name to V K Sasikala to possibly cover up her relation with her husband Natarajan whom she disowned through a public statement in 2012) are flabbergasting. All these years, Sasikala Natarajan and members of her Mannargudi clan were portrayed as caretakers of late Jayalalithaa with no interest in the affairs of the party or the government.

But the statement issued by Thambi Durai, Lok Sabha Deputy Speaker and a prominent leader belonging to the Gounder community, belies all such notions about Sasikala. “Respected Chinnamma (read Sasikala) was very closely associated with Hon.Amma (HA) and made several sacrifices during the last 35 years. Due to political vendetta, false cases have been foisted against Respected Chinnamma (RC). Respected Chinnamma went to jail and underwent many struggles. RC has given valuable suggestions to HA regarding party administration and also in governance. Like this, the list of traits of RC can go on,” said Thambi Durai in a signed statement issued on the letterhead of the deputy speaker of the Lok Sabha prior to the convening of the General Council meeting. Readers should keep in mind that the same Thambi Durai threw his hat into the ring for the Chief Ministership after HA passed. This volte face on his part is stunning indeed!

[dropcap color=”#008040″ boxed=”yes” boxed_radius=”8px” class=”” id=””]T[/dropcap]his Monday saw Thambi Durai issuing another statement in his official letterhead demanding the coronation of Chinnamma as the Chief Minister of Tamil Nadu. His argument was that people do not like the idea of two centres of power. The same person should hold the posts of general secretary of the party and the chief minister for effective implementation of the welfare measures initiated by Honourable Amma, said the gospel issued by the Deputy Speaker who in normal circumstances does not intervene in political party issues.

Even as Sasikala was elected as general secretary of the party and she is making the ground clear for her swearing in as chief minister of Tamil Nadu, there are certain justifiable questions and reasonable doubts haunting the minds of the people of Tamil Nadu. The media in India is afraid to highlight these issues as it may affect the prospects of them receiving advertisements worth millions of Rupees to be released by the AIADMK government.

Chinnama Sasikala who shed her chins on December 29 and the management of the Apollo Hospitals have much to answer.
Note:
1. The conversion rate used in this article is 1 USD = 67.90 Rupees.
2. Text in Blue points to additional data on the topic. 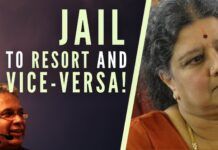 Karma catches Sasikala; the only one to convert a jail into resort & vice versa, says Sree Iyer 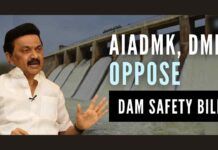 Is Frexit next? RV discusses the slow disintegration of Europe