“We expect 4G net adds to be faster than 3G net adds by 2018-19 and estimate 3G subs to be largely restricted in areas where 4G coverage is limited,” it added.

The report said with Reliance Jio’s launch expected to be in March 2016 or later, it is believed that the big three players – Bharti, Vodafone, Idea – will have a head-start in 4G and also have incumbency advantage.

“We think that continued delay from Jio will make it difficult for Jio to poach more high-end subs as the company would need to focus on offering a differentiated service as aggressive pricing alone would not be able to help Jio have a sustainable advantage,” it added.

[dropcap color=”#008040″ boxed=”yes” boxed_radius=”8px” class=”” id=””]I[/dropcap]t considers that the top 5% customers of big three telecom companies, who contribute to 25 percent of revenues, to be sticky and unlikely to switch now with 4G being offered by their existing telcom operator. “We estimate the big 3 telcos 4G market share to increase from 53 percent in 2016-17 to 60 percent by 2019-20 though we estimate Jio to have largest subs market share in 4G,” the report added. 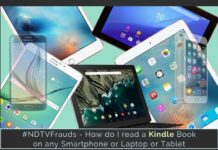 How do I read a Kindle Book on my SmartPhone or Tablet or Laptop?

Halloween to give heebie-jeebies to Delhiites