“Another target achieved: UDAY bonds worth almost Rs 1 lakh crore issued in the last financial year helping achieve 24X7 affordable power for all,” he said in a tweet.

He also added that, “Congratulations to the people of Uttarakhand on the Govt. of India, State and DISCOMs signing UDAY MoU to ensure power for all,” on the state signing the Uday MoU on Thursday.

“Under UDAY, ten states have signed MoU till date. The combined discom debt that would be restructured in respect of these states is around Rs.1.96 lakh crore, which is approximately 45 percent of the total outstanding discom debt of Rs.4.3 lakh crore as on 30th September, 2015,” a power ministry release said.

The scheme envisages taking over 75 percent of discoms’ cumulative debt by March next year. States would issue loans against the debt at prevailing market rates. The balance 25 percent would be issued as sovereign backed bonds by discoms. 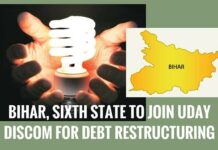