NGO thugs working as a negotiator for fees

Bhatta Parsaul. How many of you remember this village?

It was claimed that farmers do not want their lands to be acquired. It was a lie. Farmers ALWAYS welcome land acquisition. What increasingly happens is that some NGO thugs approach villagers, and tell them to hold out, the NGO will negotiate higher compensation for them. For a fees of course.

The second problem comes with land titles. Indian land records are in a real mess. To avoid paying the stamp duty, people transfer land multiple times without registering the transfer. So land may be in possession of X, but in the name of Y as per records. The government pays compensation to the person whose name is in records. Then brothers fight as to whose share will be considered acquired.

Reforms always hit the existing interest groups. Nobody loses privileges and easy money without a fight. Do not hesitate to give them one if it comes to that.

But the infantile ruling this benighted land figured out everything wrong and passed the new Land Acquisition Act. Like all laws passed post-1947, this is also a stupid law. It has made most projects in India unviable, by making land one of the costliest in the world. And it has made land acquisition all but impossible by mandating a dozen more clearances than before, each involving an entire army of NGOs.

So what I fear most about the current “farmer” agitation is that the government may surrender. That will be as big a disaster as the second battle of Tarain in 1192[1]. Or the black coats may again do something stupid in their quest to play guardian angels of this land.

Mr Modi, in the UK, when machines were first introduced in the industry, the military had to be deployed to control the workers. A collapsing India suits a lot of people in India who also control media, academia, and narrative. I hope you will never forget that you do not answer to them. Reforms always hit the existing interest groups. Nobody loses privileges and easy money without a fight. Do not hesitate to give them one if it comes to that. 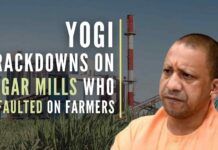 About 18.17 lakh farmers received MSP benefit worth over Rs.57000 cr in the ongoing Kharif season