Monday, June 15, 2020, has turned out to be a landmark day in Kerala’s political history. The stage has been set for the anointment of 44-year-old Mohammed Riyaz, the All India President of the Democratic Youth Front of India (DYFI), the militant youth brigade of the CPI(M), as the first Muslim chief minister of the State. (Though C H Mohammed Koya, leader of the Muslim League was sworn in as chief minister of the State on October 12, 1979, he could not complete even fifty days in his chair!). But Mohammed Riyaz is here to stay as he would soon be elevated to the Central Committee as well as the elite Polit Bureau of the CPI(M).

The foundation stone for the process began on Monday as Riyaz married T Veena, the daughter of incumbent Chief Minister Pinarayi Vijayan, and that too in the presence of Mohammed Hashim, the prime accused in the murder of Ottappilavu Suresh Kumar, an activist of the RSS. Hashim who was serving life-term in Central Jail at Thiruvananthapuram was out on parole after his sentence was upheld by the Kerala High Court.

Nandakumar, Editor, Crime, a politico-crime weekly who had filed cases against Vijayan for alleged irregularities in the contract signed between the Kerala Government and the SNC Lavlin Case, a Canadian company

Interestingly, the Chief Minister’s family had announced earlier that the marriage would be a close family affair and only close relations of the bride and the groom would be allowed for the function which was held at Cliff House, the official bungalow of Pinarayi Vijayan.
Chief Minister Vijayan himself was a prime accused in the murder of Vaadikkal Ramakrishnan, RSS worker and he was saved from imprisonment because no one was willing to come to the court and give evidence against him[1].

The presence of Hashim created a major controversy as Sandeep Warrier, BJP’s upcoming leader, questioned the propriety of murder accused serving a life term in jail entering the Chief Minister’s official residence and playing the role of a host[2].

Nandakumar, Editor, Crime, a politico-crime weekly who had filed cases against Vijayan for alleged irregularities in the contract signed between the Kerala Government and the SNC Lavlin Case, a Canadian company, said in a social media posting that Riyaz has all the evidence linking Vijayan to the SNC Lavlin which made the CPI(M) leader richer by few million dollars.

“This is a marriage of blackmailing. Riyaz had told Vijayan to be ready to go to jail if the latter does not allow the marriage to take place,” Nandakumar had said in a post he made in the social media.

As reported in PGurus earlier, this is the second marriage for both the bride and groom[3]. What was whispered in the corridors of power in Kerala that it is the Muslims who rule the state, will become a reality with this union. Mohammed Koya, Mohammed Aaya! 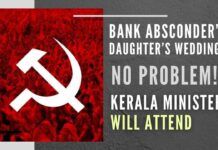