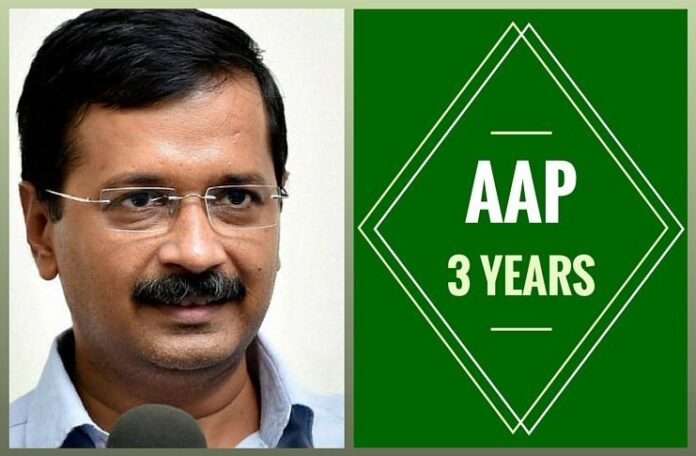 [dropcap color=”#008040″ boxed=”yes” boxed_radius=”8px” class=”” id=””]D[/dropcap]elhi’s ruling Aam Aadmi Party (AAP), which emerged from an anti-corruption movement, on Thursday completed three years, patting itself on the back but admitting it has miles to go. Admirers and critics concede the AAP is a rare product in the Indian political scene and that the country’s youngest political party has grown in the most astonishing manner.

With only nine months in office in the national capital with a choking majority in the 70-member assembly, the Arvind Kejriwal government – as it is widely known – claims plenty to its credit.

It has kept its main election promise and made power cheaper and brought down water tariff.

But two key manifesto promises, a Jan Lokpal Bill and free Wi-Fi for the city, still remain on paper.

“AAP is where it is today thanks to the efforts of thousands of tireless volunteers. I salute their dedication,” he tweeted.

Since taking office in February, the Kejriwal govenment had been locked in unending turf wars with the central government.

With Delhi Police reporting to Lt. Governor Najeeb Jung and not to him, Kejriwal has plenty of reasons to attack the police. He is also relentless in his criticism of Prime Minister Narendra Modi and the BJP.

[dropcap color=”#008040″ boxed=”yes” boxed_radius=”8px” class=”” id=””]D[/dropcap]ilip Pandey, the AAP’s Delhi unit chief, told IANS that the party was formed to unleash a new brand of politics. “We are here to change the rules of the game and initiate alternative politics. We have ended the widespread VIP culture. This is our USP,” he said.

“We are still the loudest voice against corruption. Our government removed its own minister when it found he was involved in corruption.

“We delivered whatever we had said unlike Modi… We lowered electricity bills and delivered free water. We are serious about women’s security and have deputed marshals in buses.”

He said the AAP government was the first to implement the idea of involving citizens in making the government budget. But he admitted a lot of work needed to be done.

The AAP burst on the scene in December 2013 by winning a spectacular 28 seats, and formed a minority government with Congress backing. But Kejriwal resigned in just 49 days, creating widespread dismay.

In the Lok Sabha election of 2014, the AAP was wiped out barring in Punjab where it won four seats.

But in a feat considered near impossible, the AAP rose from the ashes to sweep 67 of the 70 seats and take power in Delhi in February this year.

In no time, however, problems started. In fighting erupted, and the AAP expelled two of its founder members, Yogendra Yadav and Prashant Bhushan, who accused Kejriwal of autocracy.

One AAP minister was jailed for faking his educational degree, a former minister was arrested for domestic violence, and at least three other legislators were arrested, including one on Wednesday. The AAP also sacked one of its ministers on corruption charges.

All this has given plenty of ammunition to the Congress and the Bharatiya Janata Party to run down the AAP.

Bhushan also found fault with the AAP but said it had a few good things.

“The good things are overshadowed by the growing involvement of its MLAs in corruption and unnecessary fights with the central government,” Bhushan told IANS.

Kejriwal has made it clear that the AAP is not eyeing the next Lok Sabha election but is confident of taking power in Punjab where assembly polls are due in 2017. Even its critics admit that the AAP has become the third major in Punjab after the Akali Dal-BJP alliance and the Congress.

[dropcap color=”#008040″ boxed=”yes” boxed_radius=”8px” class=”” id=””]A[/dropcap]AP leaders say their mission is to strengthen the party’s appeal in Delhi. It has turned its back to its earlier hopes of contesting municipal elections in Mumbai and Bengaluru. “We have to work more on the health and education sectors,” Pandey said. “The government is also working on setting up 500 more schools.”

Pandey said: “I admit there had been a little delay in bringing the Jan Lokpal bill. But it has now been passed by the cabinet.”

Bhushan, however, said the AAP had drifted away from its core values.

“It was formed as a vehicle of alternative politics. Today, three years later, it is clear the party has betrayed all its founding principles.

“There have been no elections within the party. It is run on the whims of Kejriwal.”

Support for the AAP runs deep and so does criticism in a city that until three years ago was used only to the BJP and Congress.
Residents admit that corruption has come down in government departments since Kejriwal took office. His regime has ended preferential allotment of vehicles with beacon light and large bungalows to ministers.

The Delhi Secretariat will be the first building in the city to run wholly on solar energy. But with poor roads, choking traffic and plenty of pollution, the AAP has a long way to go. 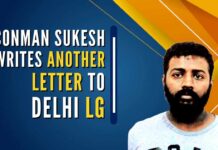 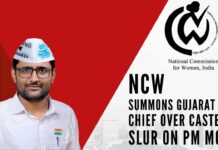