[dropcap color=”#008040″ boxed=”yes” boxed_radius=”8px” class=”” id=””]A[/dropcap]s one enters the Visual Arts Gallery at the India Habitat Centre, what first catches the eye is a large empty circle filled with rose petals – and several hundred wax body parts placed beyond this Lakshman Rekha. Then, there are installations of reddish-purple female heads and wall-hangings made of objects like pepper, chillies, cloves, condoms, fish, ash and coconuts.

[dropcap color=”#008040″ boxed=”yes” boxed_radius=”8px” class=”” id=””]M[/dropcap]“y work is all about reclaiming the private space for women in India. Women are venerated like a Goddess in the realms of public space by conservative minds. They try to push women in the private space in the name of safety.

I think it should be the opposite way. Why is the male gaze always objectifying women? This needs to be addressed. The installations are all about reclaiming the space. Women should feel confident about claiming the public space,” says the artist who moved to Goa from Germany in 2003.

Through the Lakshman Rekha, the central piece of the exhibition, the artist said that she dealt with powerful cultural idiom of crossing moral boundaries, referring to Lakshman drawing a line which Sita was not allowed to cross. “The installation refers to women’s vulnerability like the wax it’s made of. It looks like mutilated body parts.

It was no coincidence that the crossing of the Lakshman Rekha was quoted so often by politicians after the Nirbhaya rape case. Not only are women made partly responsible for violence happening to them, but they are also pushed back into controllable space and role expectations,” said Kakar, who has founded an NGO, Tara Trust, to engage with deprived children through art.

The dastardly Nirbhaya case has also found an expression through the work “December 26, 2012 (2015)”, a floor installation of wooden items from a traditional metal workshop and copper rods.

Kakkar has also tried to instill some humour through “Screw You”, where she mocks the hypocrisy of Indian society towards women. It is an installation of reddish-purple female heads, made of wax, with shiny copper nails driven into them like into voodoo dolls.

“I refer to women living life on their own terms, disregarding the unspoken cultural contracts of a deeply patriarchal society,” she said.

For Kakar, who has been associated with gender issues for the last 20 years, a comparison of the condition of women in India and Germany is a tough task.

“India is much more diverse than Germany. In India, gender issues have other aspects like caste. Germany is more homogeneous society,” she said.

However, Kakar confessed that Germany is much more open about the topic of sex whereas in India, it’s taboo.

“I am disturbed about the way how they suppress the topic of sex and sexuality. Here, if a woman talks about sex, she is considered a slut. That’s what I tried to address through some of my works,” she said.

[dropcap color=”#008040″ boxed=”yes” boxed_radius=”8px” class=”” id=””]A[/dropcap]s a creative person, she is also concerned about the muzzling of artistic expression in the country. “If artists were limited the ways we are limited today, India would have lost its lovely temple architecture,” she said.

Lending support to the artists returning awards, she expressed hope that India will retain its cultural diversity.

The artist also described the pulling down of the “dead cow” installation at the Jaipur Art Summit as sheer hypocrisy. “It’s terrible. Art is about provoking society and artists should have a special place for expression. You should not shut down democracy,” added Kakar, who describes herself as a cultural “bridge-builder”

The exhibition is on at Visual Arts Gallery, India Habitat Centre, till Nov 30. 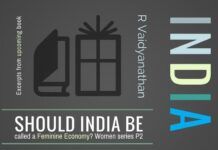 Women series – Part 2: Can India be called a Feminine Economy?

Part 6 – Why is TTD against MirasiArchakas? The Protectors of...

The idea of a Modern Secular Bharat – Part 1