Drains falling into Yamuna and Saryu have been tapped

After the success of Namami Gange in Kanpur and Varanasi, the Saryu in Ayodhya, and the Yamuna in Vrindavan are the next-in-line projects government has undertaken.

The Yamuna and Saryu are all set to become pollution-free as the drains falling into these rivers have been tapped.

Now that the drains falling in these rivers are tapped and the water of the drains connecting to the Sewerage Treatment Plant (STP) is being treated and purified. 37 drains of these major cities have been prevented from falling into the river.

New STPs have been set up on the banks of rivers. In the last 1 year, a total of 72 drains has been tapped.

According to officials, the water quality of major rivers, including Ganga, has improved significantly due to the work being carried out under the ambitious Namami Gange programme.

All the drains falling into the holy river Saryu in the religious and historical city of Ayodhya are being tapped and contaminated water is being transported to the sewerage treatment plant. This has improved the water quality of the holy river Saryu in Ayodhya. Here a big work of tapping 5 drains by I&D method has been done at a cost of Rs.37.67 crores. Along with this, the construction work of 12 MLD STP has also been completed.

A new STP of 50 million liters per day (MLD) capacity has been prepared in Ramna in Varanasi at a cost of Rs.161.31 crore and three drains falling into the Ganga have been tapped.

Principal secretary, Namami Gange, and Rural Water Supply, Anurag Srivastava said, “A campaign is being run on a war footing to keep rivers clean, especially in major cities where Ganga, the Yamuna or Saryu flow.”

The form of the river Ganga has changed in Kanpur city. Here in Bithoor 7 drains have been tapped by the I&D method at a cost of Rs.13.40 crores. The sewage water is being treated and purified in the STP. The pollution of the river Ganga is now on its way to an end. Under the Namami Gange programme, work has also been done on the sewerage scheme at a rapid pace. The work of laying 106.67 km of sewer lines has been completed with a sewerage plan of Rs.430.49 crores. Along with this, 10350 sewer house connections have been made and the work of desilting 182 km in the river Ganga has been completed. 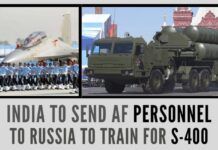 Ignoring US objections, India to send 100 air force officials soon to Moscow for training to operate S-400 Missile systems. Supply to start only... 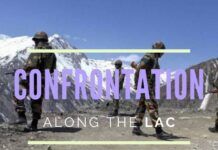