Ignoring the US threat of imposing sanctions, the first batch of Indian Air Force personnel will shortly leave for Moscow for training to operate S-400 air defence systems. India and Russia had inked a deal in 2018 worth over six-billion-dollar deal (Rs.45,000 crores) for five defence systems. PGurus have reported how Russia had fooled India in S-400 deal by delaying the start of supply by December 2021, while China had already placed its S-400 missiles against India by installing in Tibet region pointing to Ladakh. US had already imposed sanctions for buying S-400 from Russia and it is a well-known fact that S-400 is having Chinese software. Ignoring US offer of advanced missiles, Narendra Modi Government preferred buying the Russian S-400 which is operating on Chinese systems. PGurus have reported in detail about the problem India is going to face and the ditching of Russia[1].

According to Indian defence experts, the first S-400 will arrive in India by this year-end and the remaining four systems will be inducted by 2023. China has already inducted six S-400 air defence systems and India needs it urgently to bolster its capabilities to secure its air space. The S-400 can detect an incoming hostile aircraft or missile from a distance of more than 500 km and shoot it down. China has placed its S-400 in Tibet region focusing Ladakh.

India and Russia had firmed up the deal for five S-400 missile systems despite objections from the US and the threat of sanctions under Countering America’s Adversaries Through Sanctions Act (CAATSA).

Giving details of the Indian team’s departure to Moscow, Russian Ambassador Nikolay Kudashev on Tuesday here described it as a “remarkable occasion” that will usher in “a new stage in our strategic partnership.” More than 100 personnel including officers and airmen will leave for Russia by the end of this month for training. “S-400 supplies initiative is one of the flagship projects in the Russian-Indian military and military-technical cooperation, which historically constitutes the main pillar of the special and privileged strategic partnership between our two friendly countries,” the envoy said while hosting the Indian team at an event in the Embassy.

He said that India and Russia had firmed up the deal for five S-400 missile systems despite objections from the US and the threat of sanctions under Countering America’s Adversaries Through Sanctions Act (CAATSA). Incidentally, the US has imposed sanctions against Turkey for the striking deal for S-400s with Russia. In a farewell address early this month, outgoing US Ambassador Kenneth Juster declined to comment on whether the US would proceed with CAATSA sanctions against India over the S-400 purchase but said India should consider the impact of such purchases that constrain “technology transfers” and other defence cooperation between India and the US.

On the ongoing defence cooperation, Kudashev said along with the S-400, the two sides successfully moving towards implementation of AK-203 rifle contract, 200 Ka-226T utility helicopters supplies among others. He also said the two countries are looking forward to an early implementation of the spare parts joint production agreement besides strengthening maritime cooperation, including in the Indian Ocean.”

As regards the S-400 deal, he said it was within the framework of “just and equal relations based on the international law and the UN Charter.”

Clarifying India’s stand on the deal, the External Affairs Ministry earlier this month had said it was part of India’s independent foreign policy that guides defence acquisitions in line with national security interests. “India and the US have a comprehensive global strategic partnership. India has a special and privileged strategic partnership with Russia,” ministry spokesperson Anurag Srivastava said. “India has always pursued an independent foreign policy. This also applies to our defence acquisitions and supplies which are guided by our national security interests,” he added. 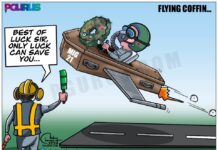 US announces new sanctions after ‘beginning of a Russian invasion’ of...