What is needed is a comprehensive review and overhaul of the operating system of Indian business.

The process of economic reforms in India was born out of the 1991 crisis. It
compelled the govt. to adopt a new path-breaking policy. Now the economy has
slumped into a slowdown persisting for 2 qrs. now. So, there is again a compelling
need for stabilizing the economy and restoring its high growth. But, in the meantime,
certain economic reforms happened largely as a part of the anti-corruption drive. Let us
first recount some of them.

Demonetization was done to prevent black money transactions which have come
down substantially as a result. But it also destroyed much business thriving with the
help of black money especially in the informal sector. Formalization of a part of this
sector was not enough for compensating this loss of business or fall in GDP.

A government-constituted panel has proposed decriminalizing many of the offences under the Company Law. The RBI announced rate cuts lowering cost of credit.

Introduction of GST was an anti-corruption measure to the extent that it unearthed
large tax evasions and prevented operation of the black money supported
businesses. This also led to fall in GDP.

IBC is a measure that prevents debt-stricken / loan defaulting companies merrily
carrying on with their businesses. It affected a behavioural change in promoters and
lenders in that irrespective of how big the corporate is, the law is being enforced.

The point to note here is that economies and societies rarely settle at equilibrium and
stay there for extended periods. These are very often dynamic and evolving. Further,
macroeconomics is not simply the aggregate of actions by individuals; it is shaped by
interactions among people as well. That is how situations emerge that invite reforms
like the aforesaid and the following.

The Supreme Court cancelled in September 2014 all but four of the 218 coal block
allocations it had declared illegal and arbitrary in its  August 2014 verdict. India’s top
court recently ordered several telecom carriers, including Bharti Airtel Ltd., Vodafone
Idea Ltd. and many defunct ones, to pay the government as much as 920 billion
rupees ($13 billion) in past dues, dealing a blow to the businesses already struggling
to make profits and pare debt.

Both these matters arose from disputes between the govt and the concerned
industry and can be seen as major anti-corruption measures that shook the economy
and, in that sense, were reformative measures too.

All these definitely jolted the status quo and to some extent hampered small
business and economy. This may have also created mistrust and fear in the minds of
the beneficiaries of the corrupt practices. Yet, there was no alternative to taking
these steps.

There are, however, some genuine grievances and fears that the government has
recognised. That is why the Finance Minister recently announced a remote system
for the issuing of notices and summons. She said that permission from a two-
member collegium was necessary to prosecute tax defaults below Rs 25 lakhs.

Also, the present govt. is moving forward with many reforms for stabilizing the
economy and restoring its high growth. Plugging of leakages in MGNREGS has
been done. It has introduced flexibility in labour laws. It has lowered corporate tax
rates to the level of other Asian jurisdictions and driven initiative for GST refund to
micro, small and medium enterprises within 30 days. It has approved stake sales in 5
PSUs in the current fiscal year and identified about 50 PSUs for putting on the block.
It has also allowed a 2-year moratorium on payment of spectrum dues. It has okayed
some initiatives to revive construction sector. A government-constituted panel
has proposed decriminalizing many of the offences under the Company Law. The
RBI announced rate cuts lowering cost of credit.

More aggressive reforms are needed in areas like subdued consumption, labour
laws, regulatory requirements and transmission/availability of credit for small
businesses, enforcement of contract and registration of property etc. What is needed
is a comprehensive review and overhaul of the operating system of Indian business. 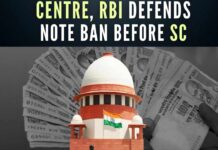 Black money, fake currency & terror financing are like ‘Jarasandha’, should be cut into pieces: Centre to SC on demonetisation