The annual Amarnath yatra to the 3,880-metre-high cave shrine in south Kashmir will commence on June 28 and culminate, as per the tradition, on the day of the Raksha Bandhan festival on August 22. A decision to this effect was taken at the 40th board meeting of the Shri Amarnath Shrine Board (SASB) chaired by Lt Governor Manoj Sinha at Raj Bhavan here, said officials.

The registration process for the yatra would begin on April 1 through 446 designated branches of Punjab National Bank, Jammu and Kashmir Bank and YES Bank in 37 states and union territories. The yatra was restricted to a group of Sadhus last year due to the Coronavirus pandemic, while a year earlier it was called off mid-way due to a “terror threat” on August 2, three days before the Centre revoked provisions of Article 370 and divided the state into two union territories.

The pilgrims can also download the “Shri Amarnathji Yatra” app available on the Google play store to get real-time information about the Yatra and to avail of several services online.

The board will also enable the live telecast of morning and evening Aarti for devotees across the globe. The pilgrims can also download the “Shri Amarnathji Yatra” app available on the Google play store to get real-time information about the yatra and to avail of several services online. The meeting chaired by Lt Governor Manoj Sinha also deliberated at length on the number of yatris who would be allowed to register, date-wise and route-wise, for this year’s yatra. Considering the carrying capacity of the existing tracks and other available infrastructure in the yatra area, the board has decided to enhance the daily route-wise yatri ceiling from 7500/ Day/ Route to 10,000/ Day/ Route, excluding yatris who would travel by helicopters.

Sinha also directed the issuance of special invitations to Akhada Parishads, Acharya Parishads and exploring the possibility of establishing counters at prominent religious places across the country for the facilitation of the saint community.

Details and procedures of Amarnath Yatra can be read here[1]. 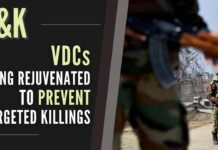 Why is the J&K UT administration differentiating between terror victims and on what grounds?

“Time to put historical facts in the right perspective”: RSS on...